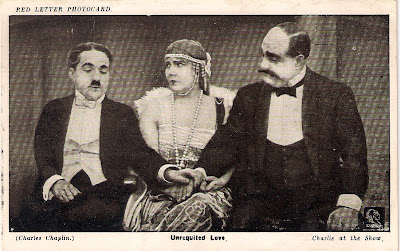 By chance I came across this 'Red Letter' card while looking for something else. I laughed just to look at it for it sums up the silent film stars skills in portraying meaning by facial expressions. Chaplin  intends to hold the hand of the woman but instead it is her husbands.   The title of the card  "unrequited love" also chimes in with some of those anonymous cards that will be sent for Valentine's day on Monday.

The film is the 1915 "A Night in the Show" (hence the subtitle Charlie at the Show), filmed for Essanay studies (the logo in the corner), Chaplin took on two roles, that of  the two inebriates  Mr Pest and Mr Rowdy.  Here he is Mr Pest who keeps moving into different seats before the show eventually starts, ending up in the best seat in the house, the front balcony by the side of the stage.  The woman of his attraction is Edna Purviance, who appeared as female lead in more of his films than any other actress, although in this one she only has a small part.  The plot and the scenes of the film were taken from the stage show that Chaplin performed as part of the Fred Karno Company called "A Night at the English Music Hall" when it toured the USA.  Mr Rowdy will pour beer down on the audience, there will be escaped snakes, a minor custard pie incident, a lady pushed in a fountain, and it will all end with a fire eater and a fire hose out of control.  The usual comedy mayhem.

The poster featuring the scary lady that makes Chaplin move seats yet again.
Beth at The Best Hearts Are Crunchy is the hostess of Postal Friendship Friday

That is too funny! Have a Happy PFF!
Tete

Just to answer you comment- the stairs were iron and began pulling away from the building and the railing was coming apart. Some of the steps were unsafe. It was taken down and if more money comes in, it will be replaced with a reproduction, like the original, but stonger.

Wonderful post. You did quite some research for it. Do you know why it is called a Red Letter photocard?

Love the funny picture-we need more simple laughs like that!

Love that card! So funny!!

I love those expressions as much as I like Edna's opera night "get-up". Charlie loved to put the moves on the ladies... well not so much ladies as young women...well not exactly young women...a bit younger than that.

Nice card...Chaplin become a millionaire by playing a vagabond. :)

The old silent screen stars could certainly get across their emotions with their facial expressions! Fun cards.