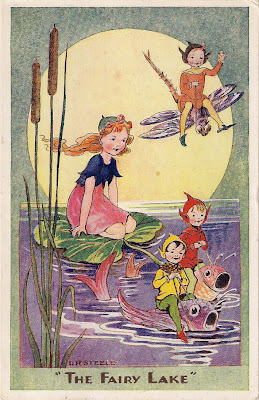 Dragonflies are one of my favourite insects but that pixie looks far too large for it, or perhaps being a creature of magic it is as light as gossamer. The Fairy Lake, painted by LR Steele who did a lot of paintings of fairy tales and mythology for the postcard publishers Salmon.  The lake portrayed as magical place, I love the colours. The pointed ears and caps I think suggest Pixies, a part of Celtic folklore who are rather mischievous so indeed would have fun riding fish. In country districts in times past a bowl of milk and bread would be put outside so that pixies wouldn't play pranks on the owner.   Of course fairies were more benign creatures but they also liked to test humans.  No wings are evident on the lilly pad fairy, maybe she has tucked them away, or perhaps is an enchanted child.

The card was sent on 17 September 1947 from an aunt staying in Ross on Wye, (a pretty place lying on a bend of the River Wye on the Welsh borders, and if anywhere were to have a fairy lake it would be there), to her niece. A nice clear postmark but the message was written in pencil so has faded 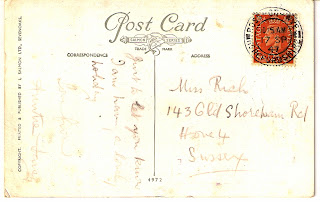 I like your blog very much: postcards, stamps, detailed comments...Maybe I should review it on alexa.com, if you want.
Please write, if you want, a quick review for my blog on alexa.com - the link is in my blog, including the today's blogpost that you just visited.
Thank you and best wishes! :)

I love that card. I haven't seen that artist or type of card before. I imagine there aren't many in the U.S.

The fantasy here in hte illustration is just wonderful.

This is a beautiful well composed image, and I too like to think the child is innocently enchanted.

wonderful postcard and just look at that date stamp cancellation on the reverse - i don't think i've ever seen such a neat, perfectly central post mark!

Howdy
Happy belated PFF .
I truly love this card.
I was recently trying to explain gossamer to my son and he really didn't get it ,but was most polite about it :)
Thank you for a way to help him understand.
Sometimes I need to explain things with Fairy Tale words.
Have a fabulous rest of the weekend .
Until Next Time
Happy Trails

Just exactly what you would imagine fairies would be and what they would be doing. Absolutely charming.

Oh I remember seening pictures like that many years ago. It brought back lovely memories!