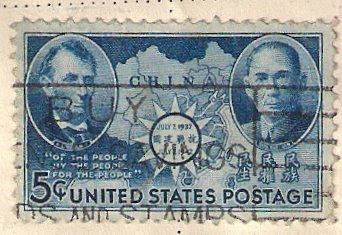 This week's theme of Sunday Stamps is Presidents/Heads of Government so here is a stamp where you get two for the price of a 5 cent stamp.  Issued on 7 July 1942 for the Chinese War Effort it commemorates China's resistance to Japanese invasion and  the 5th Anniversary of the Sino-Japanese War .  By this time of course the USA was also at war with Japan.  To be able to see the stamp more clearly and so much more blue, without the postmark, here it is courtesy of Wikipedea.

The map of China, with an image of the sun and dates of the conflict.  On the left  Abraham Lincoln with  the Gettysburg Address quote, "Of the people, by the people, for the people".  On the right is Sun Yat-Sen, founder of modern China with underneath, (depending on which explanation you read) is either a repeat in Chinese of "Of the people" or his three principles doctrine.  That is Nationalism, Democracy and People's Livelihood.  Not too different from the Lincoln's ideals of  nationalism, equal rights and democracy.  Both men were born poor, revolutionaries and died before their time.

Viridian's Postcard Blog is the host of Sunday Stamps

That's an interesting combination of leaders from different ages and countries.

Informative stamp; I wonder what modern day China thinks of this.

How very interesting! I don't suppose China's president will have figured very often since, on a US stamp.