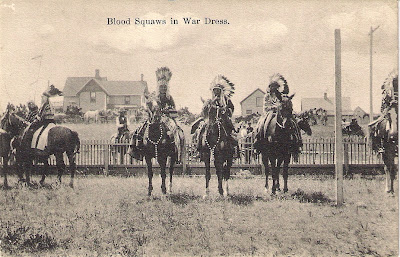 Two postcards on linen paper from the "Canadian Indian Series" published by A.Y. and Co.  This was of the then largest gathering in the Northwest on 30th August 1907 in Macleod, Alberta.  My card, as can be seen, is black and white but they must have also produced tinted versions because I came across the same image on the Internet looking like this:

It is like one of those "spot the difference" quizzes.  The pole and the electricity pole in the right background having disappeared. An early Photoshop.  The first card was numbered To.158-6 and the next card I have is 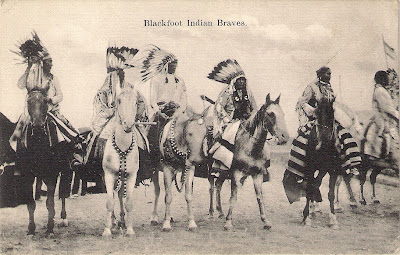 To.158-7 showing the same Blackfoot tribe with full war-bonnets.  These were traditionally made out of golden eagle feathers, each feather had to be earned by an act of bravery and each feather had its own story. Although in old western films Native Americans  were generally show wearing war-bonnets they were only worn by a few dozen tribes in the Great Plains such as the Sioux, Crow, Blackfoot, Cheyenne and Plains Cree.

The Blackfoot people call themselves Niitsttapi meaning "original people", their historic territory ranging from Alberta to Montana.  In present times there are 4 separate tribes, 3 in Canada and 1 in the USA. They are apparently called Blackfoot in Canada and Blackfeet in the US.  This name originates from the English translation of Siksika which refers to the dark coloured moccasins. The women of the tribe would make and decorate the clothing for everyone, usually made out of antelope and deer hides. 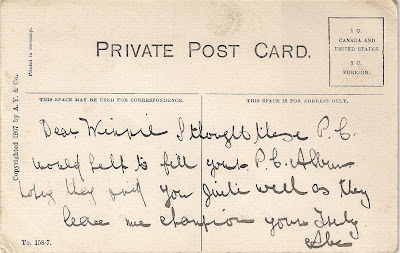 "Dear Winnie, I thought these PC would help to fill your PC Album. hoping they find you quite well as they leave me champion. yours truly Abe".   These cards were sent to my Grandmother. I never saw an album, perhaps she had one in the past, but like me she kept them in a box.

Wonderful cards and information. I love that they were sent to your Grandmother. Wonder where the album went? !!!! Mine are all in a box, too. Happy PFF!

I wonder what "blood squaws" are.

Same question as Postcardy - blood squaws? It's good to hear some of the real history of these native people. Our old cowboy movies and old slanted history books misinformed generations of Americans.

I tried to find out what blood squaws meant and that is how I came across the tinted card but no luck, a mystery. Could it mean they were related, or alternatively had spilt blood. You decide:-)

Cool post. My dad is an elder in a Cherokee tribe here and I am a member. I love the history of all the tribes and your postcard is wonderful, more so since it belonged to your grandmother.
Tete

I love seeing different treatments of the same image. Thanks for the history, too!

I am a member of the Blood Tribe in Alberta Canada. Blood is the name of the Tribe.