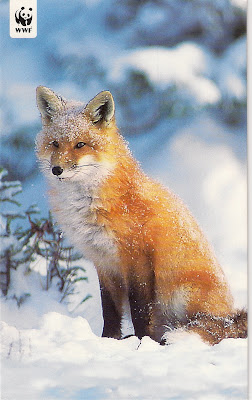 A red fox (Vulpes vulpes) its fluffed fir keeping it warm in a Finnish winter. My postcrossing friend Eeva says she can sometimes see foxes even in the neighbouring woods of Helsinki. That foxy face lives up to the saying that the fox knows many things.  The card came with a lovely faux stamp of the 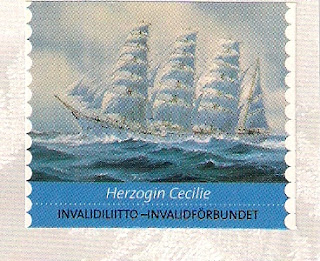 4 masted barque Herzogin Cecilie, named after a German Crown Princess and launched in 1902. Painted white it was one of the fastest windjammers ever built and logged a speed of 21 knots at Skagen off the Jutland peninsula. She won the famous Grain Race from Australia 4 times (her fastest journey was 86 days), but making for Ipswich on the east of England in April 1936 she grounded on the Ham Stone Rocks in dense fog, eventually drifting onto the cliffs. The crew were taken off and the ship beached, people came from miles around to watch.  Stranded the grain fermented and  swelled, cracking the deck. The ship affectionately known as The Duchess broke up.  The figurehead was sent to a museum and the remains sold for scrap.  (Her cabin and figurehead are preserved at the Ålands Sjöfartsmuseum). The wreck still lies near Salcombe.  Her fascinating story and description of a dive round the wreck is on the site - Submerged
Posted by Joy at 18:32