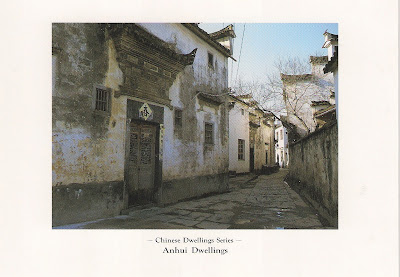 Xidi Dwellings (Qing Dynasty), Yi County
The Xidi village in China was originally called Xichuan (west river) because of the streams that pass through it from the surrounding mountains. In 2000 it was declared a World Heritage Site by UNESCO for its "graphic illustration of a type of human settlement created during a feudal period and based on a prosperous trading economy".  The prosperity of this village peaked in the 18th and 19th centuries when there were 600 residences. Most of these types of villages disappeared in the 20th century so the 124 residences that survive in Xidi from the Ming and Quing dynasty are important historic remnants, many are open to the public.

My sender likes these type of ancient dwellings their detail and figures on the wall and eaves. They remind me of the ones that sometimes provide the background in wushu films, but without the flying martial arts. The story of the growth of Xidi could probably come from one of those films.
"The Hu family from Wuyuan (Xinan), adopted a son of the Tang Emperor Zhaozong (888-904) after the Emperor was forced from his throne in 904, naming him Hu Changyi. One of his descendants moved his family from Wuyuan to Xidi in 1047. The construction of a number of important private and public buildings began at around that time. From the mid-17th century until around 1850, the Hu family was influential in both commerce and politics. During the Ming and Qing dynasties, members of the family became imperial officials, while many also became graduates of the Imperial College".