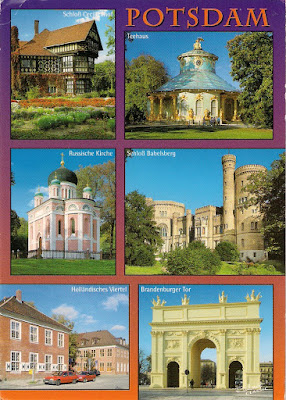 Potsdam sounds like a wonderful place, described as a town of palaces, castles and parks, with a series of interconnecting lakes around the city. In the 17th and 18th Centuries it was the summer residence of Prusian kings and German emperors.  It is my senders ex home town and she likes to send British postcrossers the ones with some English looking buildings. Spot which two they are.

You couldn't get more english than the top left Shloß Cecilienhof which was actually built to look like an English Tudor house and is based on a house I have actually seen, Bidston Court on the Wirral (a peninsular near Liverpool). Cecilienhof was the last palace built by the Hohenzollen family and Emperor Wilhelm II erected it for his son. Like many of the palaces in Postsdam it is part of the UNESCO world heritage site of palaces and parks.

The fairy tale house top right is the Teehaus, or Chinese Tea-house and was built for Frederick the Great in the 18th Century to adorn his flower and vegetable garden, it reflects the love of chinoiserie that swept Europe at that time. This building mixes oriental and rococo, I'd love to have a look inside.

Bottom left - Hollandisches Viertel, the Dutch Quarter is in the heart of Potsdam with many cafes, pubs, arts and crafts shops. 134 houses were build of red brick on 4 squares by Jan Bourman in the 18th Century.

Middle right - Schloß Babelsberg was built in 1835-1849 as the summer residence for Emperor William I in the English Gothic style. It is surrounded by beautiful gardens and is also part of the UNESCO site.

Bottom left - Brandenburger Tor, the gate commissioned by Frederich II in 1770, the side passages added later in 1843.

A marvellous mixture of styles and shapes in all the buildings and, as my sender says, the city has a quite an international face.  The card, alongside the German definitive flower stamps had a nicely themed 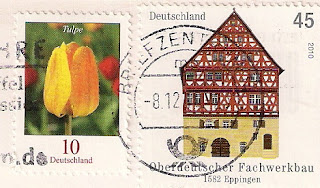 October 2010 commemorative stamp of a 1582 town-house in Epingen located in the Baden-Wuerttemberg region.


Thank you Denise I can see why your heart still lives in beautiful Potsdam
Posted by Joy at 21:06

We visited Potsdam several years ago. That little Russian church is absolutely gorgeous. thanks for posting this.

It sounds a wonderful place, I've added Potsdam to my long list of places must visit. If an orthodox church is open I'll be in to look at the icons.