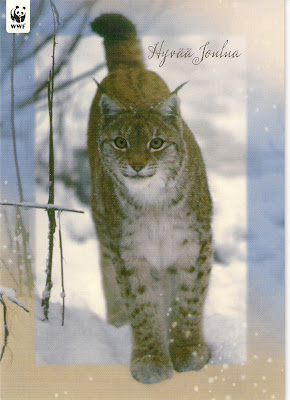 Eeva sent me this postcard from Finland which wishes Merry Christmas (Hyvää Joulna) and (ja) also on the back Happy New Year (Onnellista Uutta Vuotta).

There have not been lynx in Britain for thousands of years but this one, the Eurasian Lynx, largest of the four species, (the others are Iberian lynx, which is an endangered species, the Canadian lynx and the North American bobcat) is making a bit of a comeback in the forests of European and Siberian. In the early 20th Century they had declined to about 700 but now have increased considerably from this low point. Their habitat is remote forests and those large furry paws hit the ground and spread like a natural snowshoe. I can just imagine them padding silently through the snowy forests, their thick fur giving protection from the cold. The tuffs on the ears aid hearing and those forward facing predator eyes can spot their prey from some distance. The card came with some wary looking reindeer.  Lynx would only go after large prey like these in winter when food is scarce, and Santa Clause doesn't need them for his deliveries.

They look awfully cuddly for a dangerous wild animal.

Beautiful kitty and I love the stamp.

great card! i remember that as a child i was fascinated by the lynx...i loved those pointed ears and (don't laugh) i also loved the spelling of the word "l-y-n-x" !

Beautiful! I especially love the stamp. :)