Turku and a stamp fest 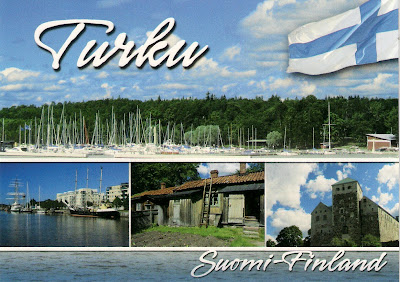 The Finnish flag flies over Turku harbour. I can almost hear the yachts and tall ship's rigging rattling in the breeze. The building bottom right is the medieval keep of Turku Castle as seen from the harbour side. Its image also appears on Finland's popular mustard Turun Sinappi (Turku Mustard).

Turku is located on the south west coast of Finland and is the home town of my sender.  It will be the European Capital of Culture in 2011.  Turku is the oldest city in the country and was the capital, until Finland became part of the Russian Empire in 1809, and then the capital moved to Helsinki.

This neatly links to the pretty envelope my Postcrosser sent me, on which was part of a miniature set of stamps 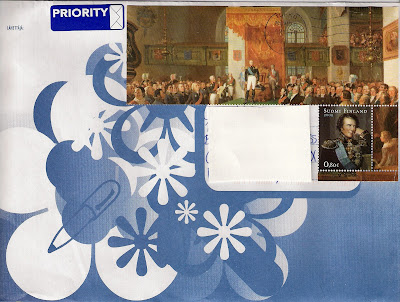 issued in January 2009 called "The First Steps Towards Independence".  After the Russo-Swedish war of 1809 Finland's connection with Sweden was severed and Finland became an autonomous Grand Duchy of the Russian Empire.  The background of the sheet shows the Diet of Porvoo (painted by RW Ekman in 1858) which established the Principality of Finland when Tsar Alexander I agreed to govern Finland in accordance with its laws. It would not be until 1917 that the country gained true independence.

The person depicted in the stamp is Count Gustaf Mauritz Armfelt (1757-1814) who was chairman of the Committee for Finnish Affairs and is considered one of the fathers of Finnish independence.  Also on the card itself there was 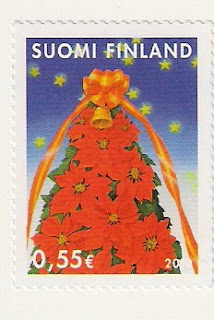 one of the 2010 joint Japan/Finland issue of  postage stamps for the festive season. One set portrayed a Finnish Christmas and this is one of the set of Japanese designed stamps and how the festival is seen in Japan.


Thank you Jassica for the wonderful stamps and card.
Posted by Joy at 02:05