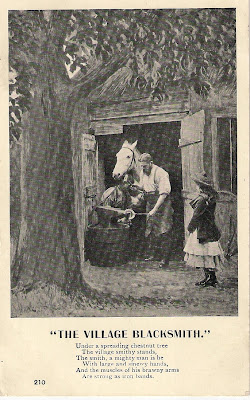 Under a spreading chestnut tree
The village smithy stands;
The smith, a might man is he,
With large and sinewy hands;
And the muscles of his brawney arms
Are strong as iron bands

One of the many poems of which I only know the first two lines. In times past children would learn lots of poems by heart at school, my father had a stack of them.  This Longfellow was one. Some were his favourites he used to regularly  quote, but he could always come up with some we had never heard before.

Although this card quotes the familiar first verse it portrays one of the later ones:


And children coming home from school
Look in the open door;
They love to see the flaming forge,
And hear the bellows roar.
And catch the flaming sparks that fly
Like chaff from a threshing floor 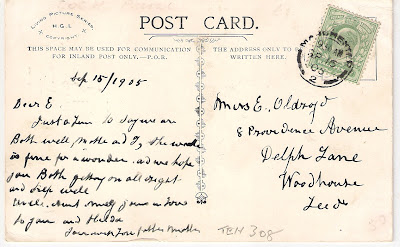 The card was sent on the 15th September 1905 "Just a line to say we are both well, Mother and I, the weather is fine for a wonder and we hope you both getting on all right and keep well. Uncle Aunt and ? love to Jane and Hilda"

An entry to Postcard Friendship Friday

wonderful image...my great-grandfather was a blacksmith...

But I do remember having to learn poems by heart. What a nightmare that was.

I like that poem. I have a very different postcard with it.

Really like this card ... a fond place in my heart for blacksmiths! Under a spreading chestnut tree ... a reminder of long ago school days! Happy PFF!

Wonderful card! It would be thrill to watch a blacksmith at work.