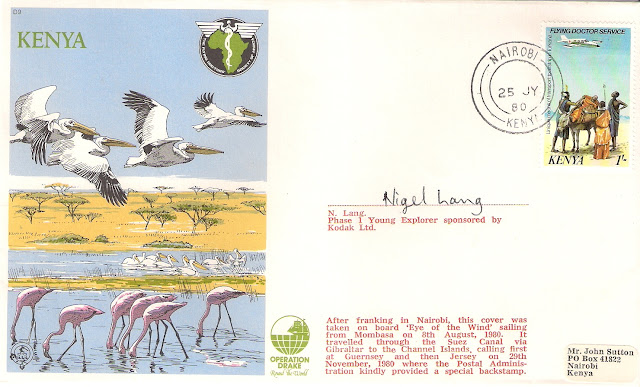 How useful my set of Operation Drake covers are being for Sunday Stamps tour of the continents.  We are in  Africa this week, which was the last stop for the 'Eye of the Wind' before returning home. Although the ship left Mombasa on 8th August 1980 the Operation Drake contingent remained in Kenya from mid July for three months. The expedition was asked to do various tasks and one of these was to complete an ecological survey of Lake Turkana (formerly Lake Rudolph) in the north of Kenya. The lake is 160 miles long and 35 across at the widest point and although it is fed by three rivers there is no outlet, the level being maintained by evaporation. The resident birds include flamingo, pelican, ibis and spoonbill and during the migration season thousand of waders an waterfowl flock to the shallows making it an ornithologist's paradise.  What a wonderful three months that must have been.

The stamp used is a celebration of the Flying Doctor Service (their badge appears in the artwork portraying Lake Turkana).  This service operates over an area of a million square miles.  I don't think I can imagine an area so vast, it makes our own air ambulance distances seem like a hop and a jump.  I wondered if I had any other medical stamps for Africa and found one

issued in 1969 by the Republic of Burundi for the 50th anniversary of the League of Red Cross Societies. 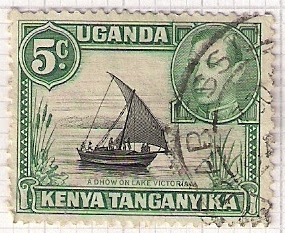 a dhow on Lake Victoria.   Then perhaps a bird that might be seen there 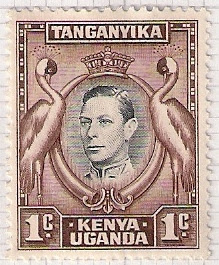 not King George VI but the Kavirondo or Crowned Crane, and animals that might come to drink at the edge of the water -

A journey round the world with Viridian Postcard's  Sunday Stamps

Although I admire your Operation Drake cards it's the stamps from Kenya, Tanganyika, Uganda that really caught my eye especially those from the time of George VI.

I think the Operation Drake cover is really beautiful. My father must have had the Kenya and Uganda stamps because I remember them.

An interesting selection, the flying doctor stamp is great, and I like the symmetrical design of the George VI stamp with the Kavirondo.

The Kenya stamp reminded me of the movie The Gods Must Be Crazy.

I remember seeing the older stamps in an album of my brother’s too, but the first picture of the Operation Drake cover is beautiful.

I like the one with King George framed by the birds. I think it looks better to have him as a center of attention than to put a small king or queen in the corner of every stamp.

Just overall a great post,and a great cover at the top. Thank you for participating.

I love the story about the cover! My sister who was a VSO Volunteer in Kenya sent me postcards with nice stamps on them. She was lucky enough to have visited the famed Lake Nakuru :D

The wildlife are spectacular!