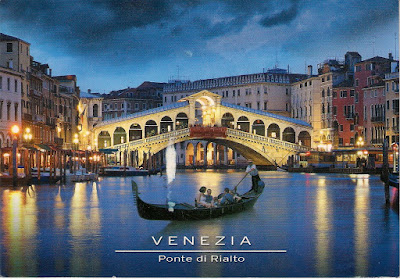 A stunning view of the Rialto Bridge as it shines into the dusk sky. Jump on board the gondola to be taken on a timeless journey. Clare and Al were having a lovely day exploring the many canals before going to the the Ufffizi Gallery and later having dinner next to the Rialto Bridge. What better way to spend a day in Venice.


The present stone bridge, a single span designed by Antonio da Ponte was finally completed in 1591. It is remarkably similar to the wooden bridge it succeeded. Two inclined ramps lead up to a central portico. On either side of the portico the covered ramps carry rows of shops. The engineering of the bridge was considered so audacious that architect Vincenzo Scamozzi predicted future ruin. The bridge has defied its critics to become one of the architectural icons of Venice. (Wikipedia)

Very beautiful picture of the bridge. I have been several times in Venice it's not so far from where my husband comes, the Garda Lake.

How marvellous to visit Venice many times Gattina, I've only been once but would like to go back. By coincidence when I visited I was staying by the side of Lake Garda.