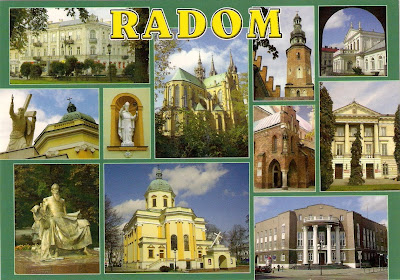 In the rather brief tourist page for Radom it says "Though Radom is more industrial than a national tourist destination it is worth visiting because of its historic buildings"  What an amazing variety of architectural styles on the postcard.   The man sitting bottom left is the 16th century poet Jana Kochanowskiego.

Radom is situated in central Poland (little map on the back of the card places is south of Warsaw) in the valley of the Mleczna river. It is one of the oldest Polish settlements, its first church being built in 1187, and in modern times is now both a railway junction and industrial centre. The main industries are leather, glass and chemicals.  If the name seems familiar it is probably because of its annual air show. It is going to have an international airport soon, due to open in 2011.  The idea that it is a railway junction sold it to me, I love travelling by train. 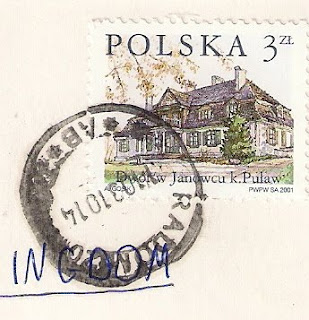 Polish Manor Houses (which are now museums) series of stamps. This is one of the two first issued in 2001, designed by Andrzej Gosik.

It is a late Baroque wooden mansion house reconstructed at the beginning of the 20th Century and moved from Moniale in 1977-85 to Janowiec on the Vistula River.

My sender was determined it was going to reach the UK because she wrote the country on both the top and bottom of the address.