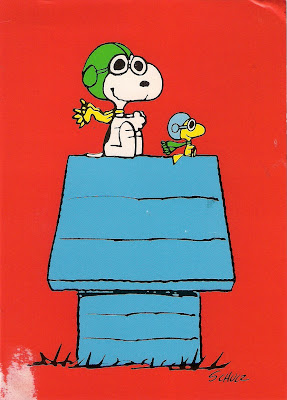 Snoopy and Woodstock being flying aces. I think Woodstock might have a slight advantage here. Charles Shutltz's Peanut cartoons are one of my favourites, the cartoon strip appeared for 50 years and at its peak ran in 75 countries and 2,600 newspapers. As he is no longer with us no more will appear but the ones we have will never loose their charm.  How about a word from Snoopy:


"I spend a lot of my time lying here on the doghouse. That's because the round-headed kid and his friends spend a lot of their days in school. I often wonder what they do there all day "
Peanuts international appeal is confirmed with this postcard for it came from Germany with 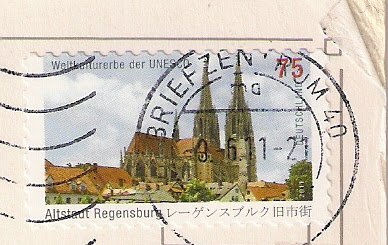 o
one of this year's "World Heritage Sites of UNESCO".  I think this set may be a joint issue with Japan because they both have Japanese writing on them and the other one of this set features a Japanese temple in Nara.  The one I received features the town of Regensburg in Bavaria which "has unique Romanesque and Gothic buildings representing an authentic image of a single European trading city of the Middle Ages".  The building that dominates this stamp is the Cathedral of St Peter surrounded by medieval buildings.


Thank you Klaus for this fun postcard.
Posted by Joy at 16:26