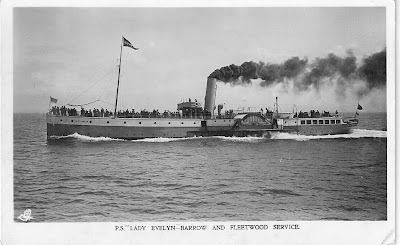 I always image paddle steamers chugging down the Mississippi to the sound of roulette wheels, but the Lady Evelyn was a Furness Railway steamer plying its trade in the Irish Sea carrying passengers between Barrow and Fleetwood in summer months. Built by Scotts of Kinghorn it was acquired by the railway to inaugurate the service in 1900 and was so successful its original length of 200 feet was increased by 30 feet in 1904 to increase passenger accommodation.  Some idea of its popularity was that in 1901 it carried 28,000 passengers but by 1903 it had increased to 41,000. Here is an advert of the time showing the route, both Barrow and Fleetwood are on peninsulas. The idea was to bring people holidaying in Blackpool to Barrow and from there onto the railway travelling into the Lake District, bringing more revenue to the railway. Of course people would also travel the other way, landing at Fleetwood (a deep sea fishing port for most of the 20th century) a seaside resort, or travel by tram into the larger seaside resort of Blackpool.

At its peak the service had four Paddle Steamers travelling up and down the coast. 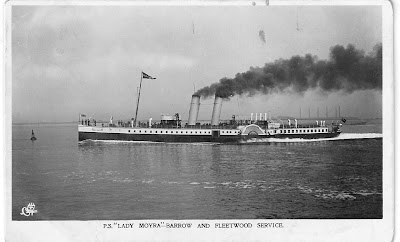 The Gwalia was bought for £22,750 in 1910 given a blue hull and a new name of Lady Moyra. She was named after the wife of Lord Richard Cavendish, he was on the board of the Furness Railways.  She was well known in the area and by chance I found a wonderful quote over on the Aesthetes Lament  by her "I don't know if I should, but I judge people by their picnics".  I rather like picnics myself but would imagine the landed gentry of those times would have wonderfully elaborate picnics.

Both these two ships shared a similar fate. In 1914 at the beginning of the First World War the Barrow to Fleetwood service finished, never to run again.  The ships were requisitioned by the Admiralty to operate as minesweepers. After the war they were sold for the Bristol Channel service, Lady Evelyn became the Brighton Belle and Lady Moyra renamed Brighton Queen.  In 1940 during World War Two they were part of the brave little fleet of small ships that gathered to evacuate the troops from Dunkirk. Lady Moyra was sunk on her second trip over the channel and Lady Evelyn was also lost on her second trip when she hit an underwater obstruction.

However let me end on a happier note for the Lady Moyra card was postally used and when it was sent in 1924 she was happily running for the White Funnel fleet. 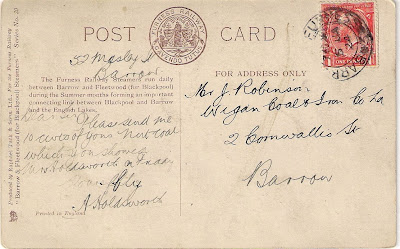 They are Raphael Tuck cards for the Furness Railway and produced as Series No 20, but at a time when inland post was half a penny so this card was sent at a later date.  It is addressed to Mr J Robinson of the Wigan Coal and Iron Company in Barrow, "Dear Sir, Please send me 10 cwts of your nut coal which you showed to Mrs Holdsworth on Friday, Yours A Holdsworth".  Was she impressed with either the price of the quality.  Keep the home fires burning.

Our hostess for the Postal Friendship Friday meme is The Best Hearts Are Crunchy
Posted by Joy at 20:57

Wowsers! What a marvelous post. I love paddle boats. In fact the old fellow who built our old place was captain of three paddle wheelers which ran up and down the Willamette River in the 1890's. I liked reading the history behind these wonderful postcards! Happy PFF!

Interesting history. At first I thought it was like the ferries that carry railway cars.

I've never thought that people would view coal before buying it!

I thoroughly enjoyed this post, no least because my parents used to live on the Fylde.

I enjoyed the post and how tourists were routed from Blackpool eventially by train to the Lake District. Thanks for stopping by my blog
Judy

What great looking boats. Thanks for sharing them! Happy PFF!

Wonderful post... I love the history that goes along with the cards. It is fun to research them! Happy PFF!

there's quite a campaign to keep paddle steamers running on the northern lakes in italy! happy PFF! http://gallery.vintagepostcardstore.net/2009/08/paddle-steamer-patria-on-lake-como-1950.html

Beautiful set of paddle steamer, thanks for sharing.

My Bangkok Through My Eyes!
You Got A Posty