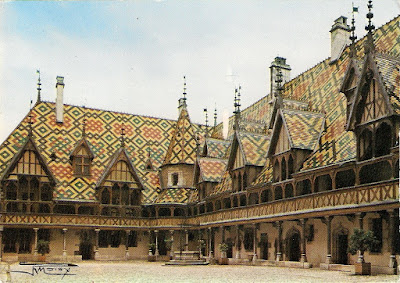 The Hotel Dieu is a former hospital in the centre of Beaune, now a museum. It says on the back "Merveille d'art burgonda-flamand", (a wonder of Burgundy-Flemish art).  My sender points out its "high-pitched roofs surrounded by numerous dormer windows with decorated gables".  What a fabulous building.  If ever I visit Burgundy it would certainly be one of the places I would like to visit.

The hospital was founded by Nicolas Rolin and his wife Giugme de Salins in 1443 as a pious foundation.  He had risen from almost nothing to become Chancellor of Burgundy and right hand man to Philippe the Good of France. It was towards the end of the 100 years (yes the English were fighting the French again) and lots of the area had been destroyed, so a hospital would be a marvellous thing.  But Chancellor Rolin did not want the Hotel Dieu to decline, the property to be passed on to others after his death, he wanted his name to live on, so he also endowed the Hospice with 157 acres of vineyard and this would provide an income and independence.

In the present day this vineyard is  a prestigious appellation and every year the wine is sold at a charity auction, the income goes towards the upkeep of the foundation. I believe that the declaration of the vintage also indicates how good that years wine will be in the rest of Burgundy.

The card came with this stamp, part of the June 2009 'Endangered or Extinct Species' series. 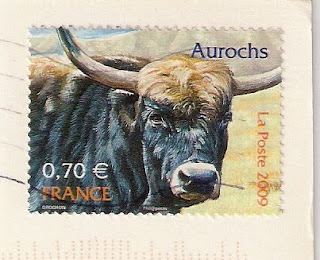 At the time the Hospice was founded this Auroch, a predecessor of modern day cattle, would still be roaming wild, but by 1627 it would be extinct, because of over hunting and habitat destruction.  It was quite a size, six and a half foot high, and a ton in weight.

Thank you Dominique from Paris for this lovely card which travelled 441 miles (709K) and took 9 days.
Posted by Joy at 22:55