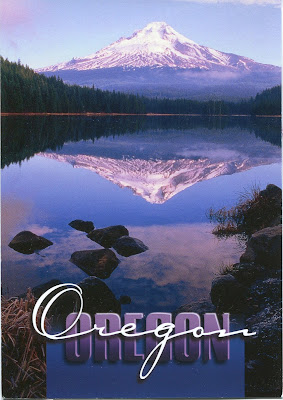 Mount Hood reflected in Trillium Lake which lies over 7 miles (12k) south west of the mountain but Oregon's highest peak can be seen for a hundred miles.  It is the perfect mountain shape as I might have drawn as child, it is actually a volcano although only partially active and not very likely to erupt. The lake is not natural but formed from damming the headwaters of Mud Creek and named after the flowers in the area. It is popular spot for fishing, camping and, yes, photography.  At 11,249 ft (3,429m) serious climbing equipment is required to reach the top of Mount Hood although its lower slopes are popular for skiing.

The sender of the card, Jess, comes from Colorado which she describes as basically nothing but mountains and loves seeing Mount Hood as she drives along the highway where she now lives in Oregon. As a contrast to her state of origin she now lives in a forest and near the sea.

'Postcards for the Weekend' on the theme - Reflections on Water - join the Maria's Linky Party here
Posted by Joy at 22:21

Lovely reflection and so calm water.

This one is also a perfect picture. How beautiful!

Thanks for this beauty, Joy! I'm dying to be back into nature; with towering land forms around me -- not concrete.

WoW!! An amazing view of our Earth's natural beauty...♥