A trio of "Cow Punchers" as the card calls them, in other words, cowboys.  Interesting that the boy who is about to brand the cow is wearing a flat cap.  Is that job demarcation!  The reverse of the card says 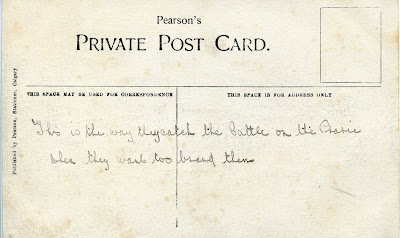 "This is the way they catch the cattle on the Prairie when they want to brand them", the farming recipient of the card, keeper of cows and collector of postcards, in the UK would have been interested on a number of levels.  The colourised card would have been sent in the first decades of the 20th century (some time after 1904 as that was the year that Canada introduced the divided back card).  Calgary was the heart of the cattle industry at the time.  I couldn't resist adding a 21st century stamp of a western saddle

Postcards for the Weekend theme - Children - join the Linky Party at Connections to the World
Posted by Joy at 19:39

Interesting - as always. i wonder why Pearson's used the word 'Private' on their postcards?

Oh wow! I thought at first, they're trying to butcher the cow!

Yep, that 'Private' at the back of the postcard is interesting for me, too!

Thanks for sharing this card, Joy! Happy weekend.

I love your choice of real cowboys. I guess the boys aren't doing that any more. Or are they?

Eva, I never actually branded a cow or calf on our farm, but as young'uns, my sister and I did work with the animals a lot on our family farm. She milked cows, and I fed them when our father was away working. Our farm was probably a lot smaller than the one on the postcard however!

We moved back to Alberta when I was 12, so I wasn't quite as young as the boy in the picture but there is a lot of work on a farm and everyone has to pitch in and do it.

Joy, it's a great postcard! Thanks for posting it!

The Private Post Card lettering is quite common on postcards at this time, I don't know enough for the reason perhaps something to do with the fact they from were individuals rather than companies. The post card at this time was evolving and this was the first time that something other than the address was allowed to be written on the back, previously the message had to be written on the front.

Hi Joy, I enjoyed your postcard and the stamp for this edition of Postcards for the Weekend. I liked John's question and your reply re the Private card. I think you are correct. Some of the earliest cards in my collection were identified as Private Mailing Cards. As you mentioned, I think it was mainly to separate them from commercial cards which were frequent at that time. Thanks for your comments on my blog and for joining in the linky.