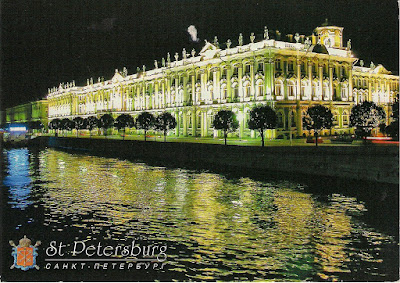 The beautiful Winter Palace looking as stunning at night at it does in the daytime.  How wonderful it must have been to live here. As my sender Olga says, here lived kings. When visiting the museums of Moscow and St Petersburg some years ago and seeing the  fabulous wealth of the tzars, one of the thoughts flitting through my mind was, no wonder there was a Revolution.  Once the winter home of the Tzars, now the palace houses part of the Hermitage collection. The largest collection of paintings in the world. You could spend years in there and still not see everything.

I think there must be a lot of postcrossers in St Petersburg, I've had a number of cards from there. It is a beautiful place so they will never run out of postcards to send and I always love to receive them.

some of the 2009 Kremlin definitives, and some I have not had. On the top, Pskov Kremlin and below, the Kazan Kremlin. Only four more to go and I'll have a full set. The blue stamp bottom left is one of the 2003 definitives of Palaces and Sculptures. This is the Gatchinksy Palace (in the outskirts of St Petersburg) and the statue of Paul I, who is known as the most romantic of the Russian Emperors. He did not have too good a time of it, his mother Katherine II neglected him and did not want him to become emperor. He spent a  lot of time at Gatchinksky. As his title implies he did become emperor but was assassinated by the nobility for his reforms (more rights for the peasantry, better treatment for serfs) and wanting them to accept a code of chivalry.