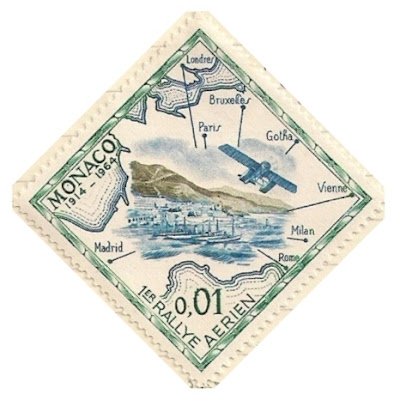 A stamp issued to commemorate the 50th anniversary of Monaco's 1st Aerial Rally which is a reproduction of the 1914 rally postcard design.  Those original postcards would be nice to own, an aeroplane picture over the map and signed by the pilots. The magnificent men in their flying machines.  The routes of the race were of equal length over land and sea, their starting points are the places on the stamp map. The winner was the aviation pioneer Roland Garros who covered the circuit in his Molrane-Saulnier flying boat. The stamp shows a flying boat over Monte Carlo harbour.

Roland Garros was the first person to fly the Mediterranean non stop, he also flew high and held many altitude records. He was in Germany giving exhibition flights when war was declared later in 1914. As a French citizen he was in danger of arrest, but fortunately neither he nor his plane was very well guarded, so he set off at night to return to France. A feat in itself, very few pilots at this time flew in the dark. Garros reported for military service. On 5 October 1918 he was shot down near Vouziers in the Ardennes region, just one day short of his 30th birthday. His name lives on as anyone who watches the French Open will know the red clay courts of the Stade Roland Garros. The airport on the island of Reunion, his birth place, also carries his name. That stamps puts the ones of the Monaco Grand Prix to shame. Roland Garros had only meant tennis tome before. I'm learning a lot each week through stamps.

That's an interesting stamp and I enjoyed the history too.

Thanks for sharing with us your stamp and a piece of history that come with it.

Thank you for sharing the histroy of Roland Garros. Flying in the dark at that time - amazing. Quite a good-looking chap too! ;-)

I agree he was quite debonaire!!! The stamps is really nice--love how it depicts the map.

I love the stamp and I'd love to get hold of one of the postcards. The modern ones from Monaco leave a lot to be desired. I must admit I had never heard of Roland Garros in any context other than tennis. I assumed he was a tennis player. How wrong can you get. :)

Great stamp, I agree it would be wonderful to have an original postcard. Thanks too for the history of Roland Garros, I had no idea.