One of my food loves is bread, a crusty loaf is my idea of eating heaven. I have never been to Switzerland but on the bread front it looks as though I have missed a treat and could spend my time eating bread and walking off the calories in the mountains.
A nice big chunk of cheese might be something else to put in my rucksack.  This however is not just any cheese but one the Swedes call the 'Emperor of Cheese', Vasterbottenost.  On the stamp it is accompanied by a rye crispbread (Knäckebröd).  Before the era of airtight containers the hole in the middle  of the crispbread was so they could be hung over the oven to keep dry (and crisp) 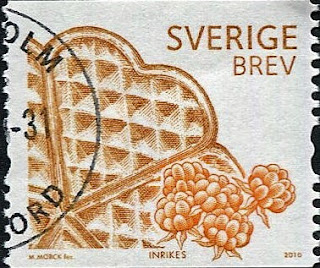 For sweet goodness then of course it has to be a waffle with that most Scandinavian of fruits, the cloudberry.   Yes I am drooling now.
The rest of this flavourful set features a candy stick most often seen here in seaside towns, although in Sweden this version is Polkagris and is peppermint flavoured. Its inventor Lena Lervik even has her own statue in Granna, Sweden.  Yes you knew it wouldn't be long before a fish appeared on a Swedish stamp about food and it is cured Salmon (Gravad lax /Gravlax).  The stamp below is fermented tinned herring (Surströmming), of which a Japanese study found that a newly opened can has one of the most putrid food smells in the world.  Swedes usually consume it after the third Thursday in August called Surströmming Day which because of the strong smell is held outdoors.   What a relief now I finish with something I would eat, an enormous cake, Spettekaka which I think is meringue like and cooked on a spit.  These cakes can be several feet high and a hacksaw blade is carefully used to saw into serving pieces for if a knife is used it will crumble and shatter so you can see the artist, Stina Wirsen, is having a bit of fun showing a man about to cut it with a knife.

I have been to Switzerland and Germany and their breads are to die for.
What a selection of good tasting and not so good tasting foods on the Swedish series. At least everyone has rosy cheeks!

I'll skip the herring and go right to the cake.

Bread, cheese and waffles - I'm in!

Crisp bread and a hunk of cheese - just what I would wnt for lunch.