Well March has certainly entered like a lion with Storm Jorge and snow on the hills so I am hoping it lives up the idiom and leaves like a lamb
and we see mischievous little lambs in sunshine.
Meanwhile in New Zealand lambing time is months in the future.  This stamp was issued as part of the Year of the Rooster set with a farmyard theme which can be seen here. 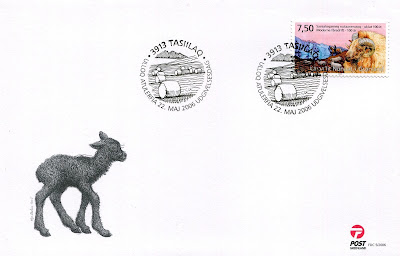 Oh a little lamb has wandered out of the field and on to a FDC.
Famously the Vikings took sheep to Greenland in 985 but both people and livestock vanished from history 500 years later and no-one knows why.  It wasn't until 1906 when 12 sheep were brought in from the Faroe Islands by the Reverend Jens Chemnitz and some years later sheep were imported from Iceland.  The flocks today are their descendants.  Sheep in Greenland have to be kept indoors during winter and today they number about 20,000, there is enough pasture land for more but that is required for producing winter fodder and why the postmark features harvest time.  This inspired idea is from the artist Naja Abelsen whose Greenland stamps can be seen here

yay, some lambs! the Swedish ones are especially cute. and I will admit, I never thought of sheep in Greenland!

I'm happy to see some lambs today! We were having maybe too much lions ;)

I like that you found lambs and lions today.

And I like the photo of the real thing, too.

So gld you found so many lamb stamps today. I was sure there was bound to be at least one from Australia - guess I have to be satisfied with New Zealand.