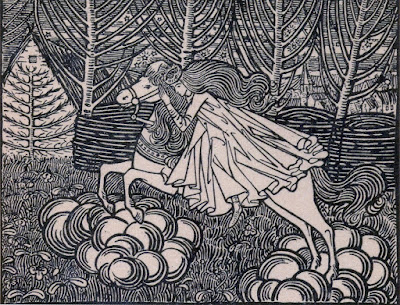 The Belgium artist George Minne (1866-1941) is more familiar as sculptor but here is a postcard featuring one of the four woodcuts that were used to illustrate his friend the poet Emile Verhaeren's collection called Les Villages Illusoires (The Illusory Villages) in 1895.  Minne's illustrations from this decade were influenced by medieval woodcuts and also the book designs of the the English artists Aubrey Beardsley and Edward Burne-Jones.


I'm joining Maria's Linky Lauch of 'Postcards for The Weekend' at Connections to the World - an invitation to all postcard lovers to share their cards - this week's theme is - Monochrome
Posted by Joy at 15:33

I'm so delighted to see my first entry for the linky party! :D

Thank you so much for linking up and sharing about my initiative on your post. This George Minne postcard is impressive with all the lines and details on it.

See you again on the next link up,
Maria

One can certainly see the Aubrey Beardsley influence on his work.