The Calf of Man referred to on the stamp is a small island off the south-west coast of the Isle of Man which is a nature reserve and home to a population of resident and migrating birds.  Here we see the Shag in all aspects of its sea life although not its powerful dive but
here it is coming up with a rather slippery catch on a Gibraltar Maximum Card.  When I saw its Latin name on the reverse of the card it intrigued me, 'Phalacrocorax aristotelis'.  The polymath Aristotle (384-322BC) is sometimes called the 'Father of Biology' as his knowledge of the natural world was based on observation and I learned that the Shag is being referred to as Aristotle's Bald Raven because the Ancient Greeks linked the species of ravens, cormorants and shags together.

Not a water bird but as the Peregrine Falcon is perched on a sea cliff I couldn't resist including it as it  searches for a tasty snack on the ledges where perhaps the next set of birds, the Guillemots, are nesting in numbers. Lastly are the cute puffins. 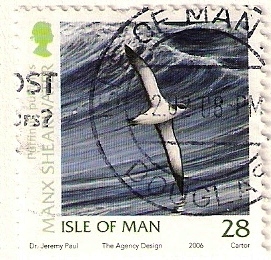 These stamps are from the 2006 'Manx Bird Atlas' set and are by the award winning wildlife artist  Dr Jeremy Paul (the Doctorate is for his marine biology research and perhaps that is why he portrays water so well). The stamp shows a Manx Shearwater who will at the moment be wisely wintering on the coast of South America. 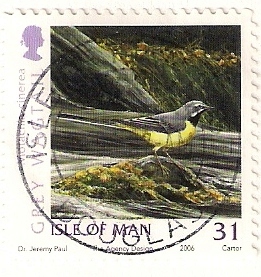 Lastly a Grey Wagtail on a fast running stream on the look out for aquatic invertebrates.


An entry to Sunday Stamps II theme - Water Birds - fly over to See It On A Postcard for feathery friends.
Posted by Joy at 11:29

The Manx bird atlas stamps are phenomenal. Heleen is going to love the puffins.

Great stamped card, too - incredible photo of the slippery catch!

Like in the other posts of this week, I prefer the flying birds. But allthe stamps you show are really beautiful.

Brilliant stamps, one and all. We see shags and even the occasional yellow wagtail on the River Tees near the Barrage at Stockton's Portrack Nature Reserve.

I have a soft spot for peregrines, so I'm glad you included this one.
And puffins!!!
I was thinking your shag looked a lot like a cormorant - and now know that they are almost the same except shags are coastal and cormorants are mainly inland.

I've never been to the Isle of Man but I should go there, to see all of these great birds in real!
(And yes, FinnBadger, you are right, aw, the Puffin!!..)

The other bird stamps are great, too. The sea behind the Shearwater and how this bird is flying! Beautiful stamp!

I was a little confused about the name 'shag', thinking the same as VioletSky did. In the Netherlands we call them 'aalscholver' which also is translated into 'cormorant'. From wikipedia I learned that the shag - Phalacrocorax aristotelis (thank you for the interesting info on Aristoteles, Joy!) - on this stamp in Dutch is named 'kuif-aalscholver' (literally 'tuft/crest-cormorant' - the adult bird having a forelock). So family but not exactly the same :-)
Cormorants in NL used to be shy and only living in a few protected nature areas, but nowadays I see them sitting on top of streetlights, their wings widely spread to dry, on my way to my work (in an urbanized area)! Beautiful silhouets, too.