The island of Alderney's strategic position between England and France resulted in a lot of  forts being built around its coastline.  During the Victorian period the British heavily fortified the island to keep naval dominance in the English Channel while they kept a wary eye on the French and also to protect the English south coast harbours. The  intention was for the island to be the base for the British fleet and hundreds of cannons were positioned pointing seaward although as the years passed the idea of war with France receded.  The island continued to be heavily fortified until after the First World War.  During the Second World War, after the retreat from Dunkirk, the islands were considered by the British Government indefensible and the inhabitants evacuated, the result was on 2 July 1940 Alderney was occupied by German forces who continued the building of heavily defended fortresses.

The building of forts on Alderney goes much further back. The Nunnery fort on Longis Bay (shown on the right) is considered one of the finest surviving Roman forts in Northwest Europe and interestingly features both 19th Century and World War Two additions. As part of the Living Islands project (launched in 2013) to encourage tourism by protecting the environment and history a lot of the forts have been made more accessible by scrub clearance and conservation.  I imagine a potter along the coastline on a sunny day with the occasional dip in the sea would be a pleasant way to enjoy both the history and biodiversity of the island.

For more elaborate structures perhaps a visit to the homeland of those German forces who arrived on Alderney might be the next step
Germany issued an attractive definitive set of stamps from 1977 to 1982 on Castles and Palaces, the keen eyed among you will see that West Berlin joined in also.  From left to right
(10)Schloss Glücksburg, a water castle, considered to be one of the most important renaissance castles in northern Europe, is situated on Flensburg Fjord and was also used by the Danish kings. (20) Pfaueninsel, Berlin. The name means Peacock Island which is on the River Havel, both the island and the palace are UNESCO World Heritage sites where free-roaming peacocks wander (30) Ludwigstein, Werratal a 15th Century castle on the River Werra surrounded by woodland 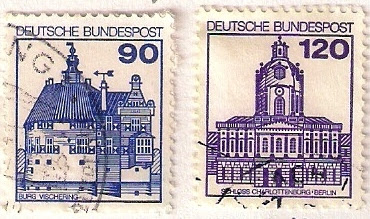 Next (90) Vischering, a moated castle in the Münster region, an area that is a must for the castle lover because it has the highest concentration of castles, palaces and fortifications in Germany.  Lastly (120) Charlottenburg, Berlin; built in the 17th Century and expanded in the 18th it is the largest palace in Berlin with a very ornate interior.

I contemplated posting some German stamps as well - checking your's a number are the same but I have at least two others from this series.

The Alderney forts set is lovely. I like the line drawings of the Schloss series - and I love the word schloss in general.

The line drawings show off the castles simply and beautifully.

I love these German stamps. The simply lines of the drawing make a very appealing design.