The Isle of Man officially issued this miniature sheet commemorating the Thames Diamond Jubilee Pageant on 3rd June 2012, the actual day the pageant took place, which explains why the photographs on the stamps do not reflect the weather of the day itself. June would normally be expected to be pleasant and flower filled month but 2012 turned out to to be the second wettest year on record and June surpassed that by being the wettest June, ever. The day was grim, wet, misty and cold, some spectators were even taken to hospital with symptoms of hypothermia.  The Queen however was made of sterner stuff

and stood on the 'Spirit of Chartwell' for the whole journey.   This motor vessel had been donated as the Royal Barge for the occasion and enhanced and decorated with flowers and gold.  The boat however that epitomised the royal journeys of the past centuries down the Thames was the 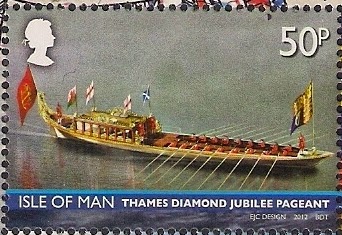 gilded  'Gloriana', the lead vessel of the water pageant.  This was privately commissioned and specially built for the occasion at a cost of £500,000 and then given to the Queen.  The name I assume refers back to the first Queen Elizabeth, one of her epithets after the defeat of the Spanish Armada was Gloriana, the name of the Faerie Queen in Edmund Spencer's poem.

Every type of ship and boat imaginable was on the Thames as part of the largest flotillas ever assembled of more than a 1000 vessels from all corners of the Commonwealth (a great occasion to test your knowledge of flags). 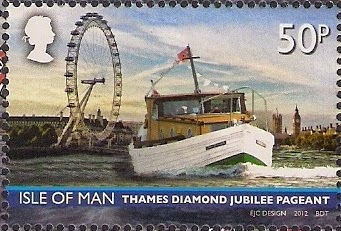 The Isle of Man contingent included this lifeboat from the Isle of Man Steam Packet ship the 'Lady of Mann' (broken up in 1971) which had been converted into a cabin cruiser. Her dilapidated state in 2009 meant she was in danger of being scrapped however the seller in Essex was a Steam Packet enthusiast so he wouldn't release her to anyone who wouldn't try to preserve her.  The buyer, Matt Cain was that man, and based nearby in Windsor and so now she is "sitting pretty on the Thames".  (I especially like the background on the stamp of the London Eye and the Houses of Parliament)  His father and uncle are both Manxmen but that was not the only reason he wanted to preserve this little boat but due to the fact that his Grandfather had been rescued from the beaches of Dunkirk, not by the Lady of Mann but by a Belgium fishing boat, however he remembered the Lady being there and the sense of hope and home she gave him. 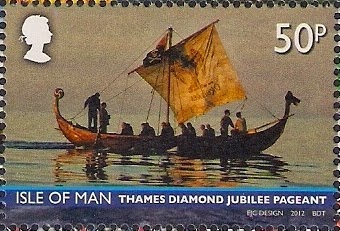 Lastly it couldn't be the Isle of Man without a Viking longboat and this is the 'Vital Spark' one of four replicas used in the annual World Championship Viking Longboat Races held in Peel.  Built of fibreglass and wooden gunwales she is built for speed.  Just think what the Vikings could have done with a bit of fibreglass.

An entry to Sunday Stamps II hosted by Violet Sky, this weeks theme is - Water - more of the wet stuff here
Posted by Joy at 11:21

Another different way to approach the water theme. You could use these for the upcoming boats theme too.
These are all fine stamps.

Interesting, I didn't know this festival, and beautiful stamps!

A lovely mini-sheet which I otherwise wouldn't have seen.

wow!! these are sooo gorgeous altogether! in a way they remind me of these Royal Barges in Thailand

I did not know about Water Festival. Thanks for sharing this beautiful stamps.
Postage Journal

I remember that event - and the weather! The stamps however are beautiful.

Great set of stamps. I like the extra long one - great way to showcase the pageant.

What beautiful stamps! And all this history makes it more interesting!

I was fascinated by the flotilla and would have loved to have seen it (in spite of the weather!)
I like the old timey illustration on the background of the sheet.