So are we in the Year of the Sheep, the Goat or the Ram?  The fact that the Chinese word for all of them is the same has thrown up some interesting discussions, Hong Kong has chosen a cute sheep for their stamp whereas China has an equally appealing goat.  Canada has taken the middle way, their stamp shows a Ram  and, according to the Astrology sites, the element for this years male animal is Wood or to be even more precise it is the Year of the Green Sheep Goat.  Helene L'Heureux spent a year researching this current Lunar Year and it shows in the beautiful image of 3 rams welcoming spring with the colours integrated into the stamp.  The one I show is the international rate postage but in contrast the domestic rate stamp shows a ram charging towards New Year happily shown on Violet Sky's hosting page.  The calligraphy is by Hong Kong born Ngan Siu-Mui.

Of course horned ruminants have appeared many times on Canadian stamps and as I am rather fond of sheep here is
a longhorn.  The engraver is Silas Robert Allen (1888-1958) who worked for the Canadian Bank Note Company in Ottawa engraving his first stamp in 1928 and would go on to create 78 designs in his working life (64 for Canada and some for the Bahamas and Norway). He is a great favourite amongst stamp engraver collectors. 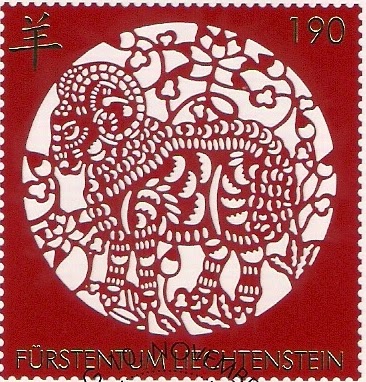 Liechtenstein's Year of the Sheep stamp has a rather nice stained glass appearance (designer: Stefan Eine) and they have also produced a stamp sheet in the shape of a sheep but I have the 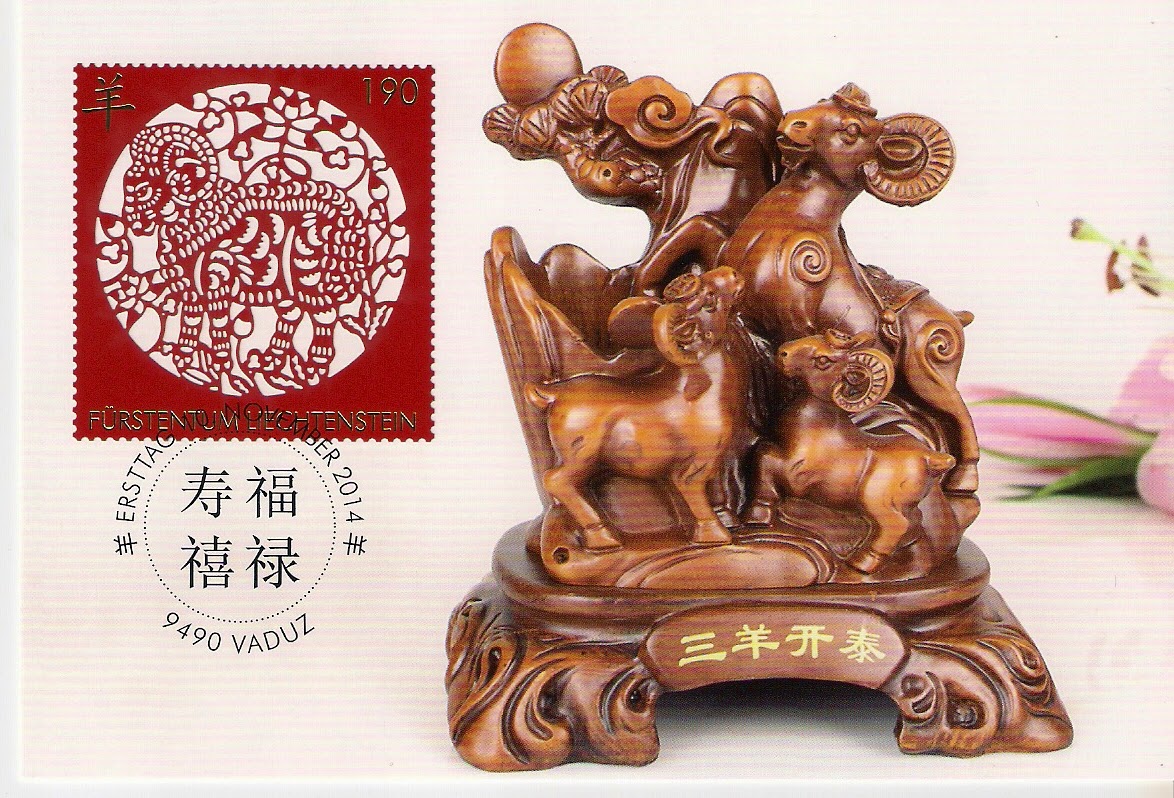 Maximum card.  As you can see the traditionally Chinese ornament has an ambiguity to whether they are sheep or goats.
When the Norwegian Vikings arrived on the Faroes there was a black goat like sheep on the island, the Dimun.  Unfortunately due to hunting the last surviving one died in the 19th century, however I imagine there are some of its genes present in the island's current population of sheep, who are a particularly hardy breed with a coarse outer coat and soft inner hair, ideal for those famous jumpers.  The artist is Astrid Andreassen a scientific illustrator (specialising in marine animals), stamp designer, artist and craftswomen. You can appreciate her love of textiles from the detail of the sheep's wool on the stamp.   For an interesting chance meeting and some of her work see the Family Adventure Project blog here .

with adorable lambs and their shepherdess.

Great selection. I particularly like the Lichtenstein stamp. And thanks for keeping me informed on extinct Viking animals - that is quite an esoteric stamp topic.

I rather like the stained glass effect but the Canadian stamp is wonderful, especially so knowing the background and research that went into its design.

I'd go for the real longhorn - what an animal!

What a brilliant blog post. Thoroughly enjoyed all the info and the great stamps.

Learned something about the Faroes - a good day today!

Oh, you posted a great selection. The last one is very sweet.

Amazing stamps, beautiful.
Sad that the black goat has vanished, and it would be good if indeed some genes remained.
Thank you for sharing both the beautiful stamps and the interesting stories.

It was quite a refreshing to see a glimpse of Spring on your stamp. I'm getting tired of winter here in Ohio.

The Liechtenstein stamp is a bit too fussy for me, but I am impressed that they have a Chinese New year stamp!
And yes, I echo Willa's desire for Spring.