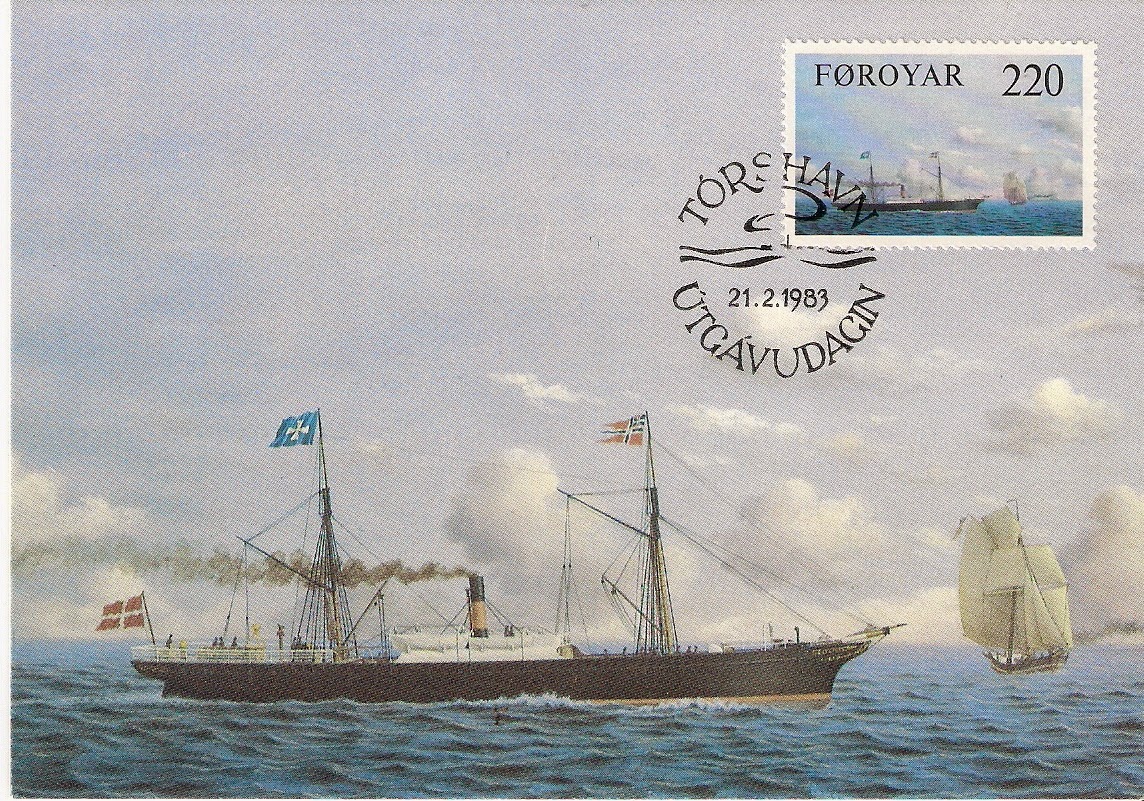 I am showing the stamps of the 1983  "Old Ships on the Faroe Run" set this week.  The ships have many things in common, they are all British built, all cargo steamships, and wait for it, all carried mail.  The paintings also indicate from the blue flag flying that they are portrayed at the time of  DFDS ownership and of course are sailing under the Danish flag.  The painting above shows the Arcturus (named after one of the brightest stars in the northern hemisphere) which started life as the Victor Emanuel in 1856 plying her trade from the Clyde to the Mediterranean.  When the Danish/Scottish company Koch and Henderson bought her they rechristened it Arcturus.  Most cargo ships would journey to the Faroes in the Spring and Summer season but the Acturus was a sturdy little ship and made five to seven trips a year and from 1858-1870 was running the mail service to the Faroes and Iceland.  Her small size was the only problem so it was rebuilt with a third mast added and a new steam engine.  By this fact we know that as the picture portrays her with 2 masts it must be before 1872 and before her rebuild.

In 1887 on a trip from Copenhagen to Danzig the Arcturus collied with the SS Savona and sank off Fasterbo.  No lives were lost as the Savona picked everyone up. 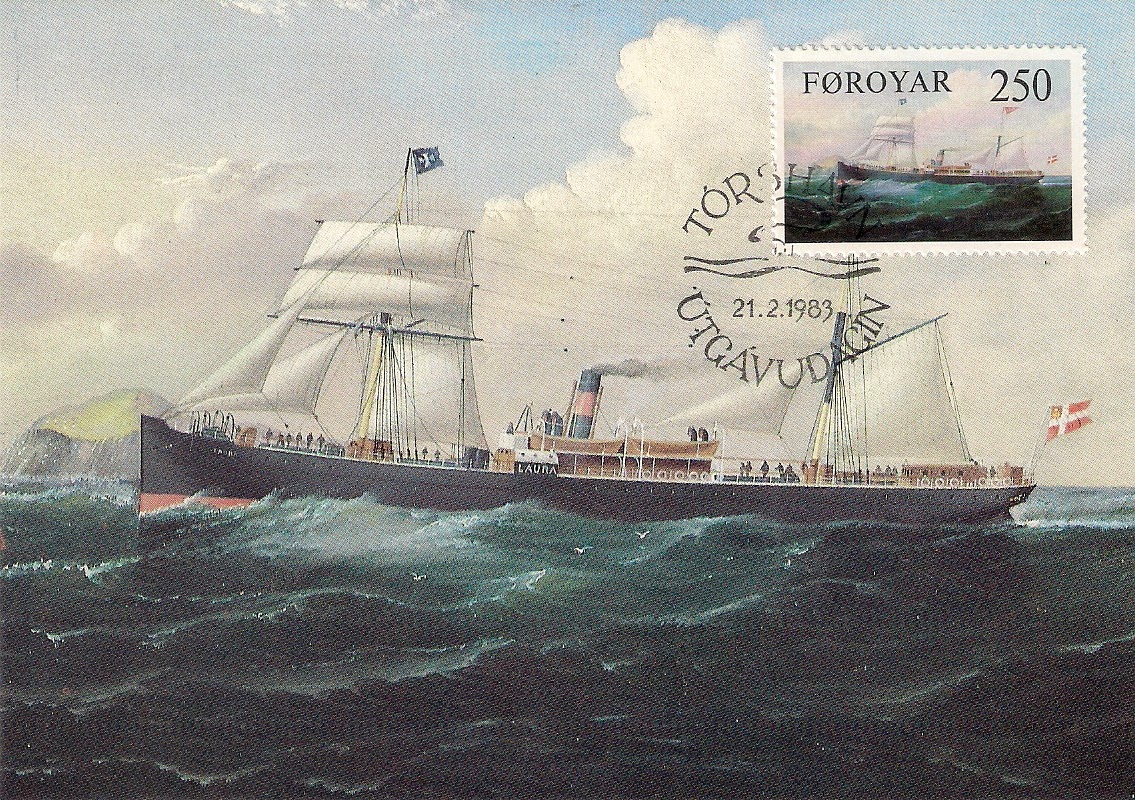 My personal favourite is this painting of the Laura in a swelling sea with the crew lined up and altering (or whatever the naval expression is) the sails.  Unfortunately I don't know who the artists were of any of the paintings (the stamp designer is P Hatting).

The Laura was built in 1882 and was bought by a Captain Peter Mærsk Møller, in 1886 for the Copenhagen to Faroe run (stopping at Edinburgh on the way).  I did a double take at that name for Mærsk Møller, is one of the biggest shipping companies in the world and it turns out that the purchase of the Laura was the start of  Captain Peter Mærsk Møller shipping career, his first steam ship.  (The middle name of Mærsk is from his mother's family name and in Danish means marshland).  The Laura was wrecked off Iceland in 1910. 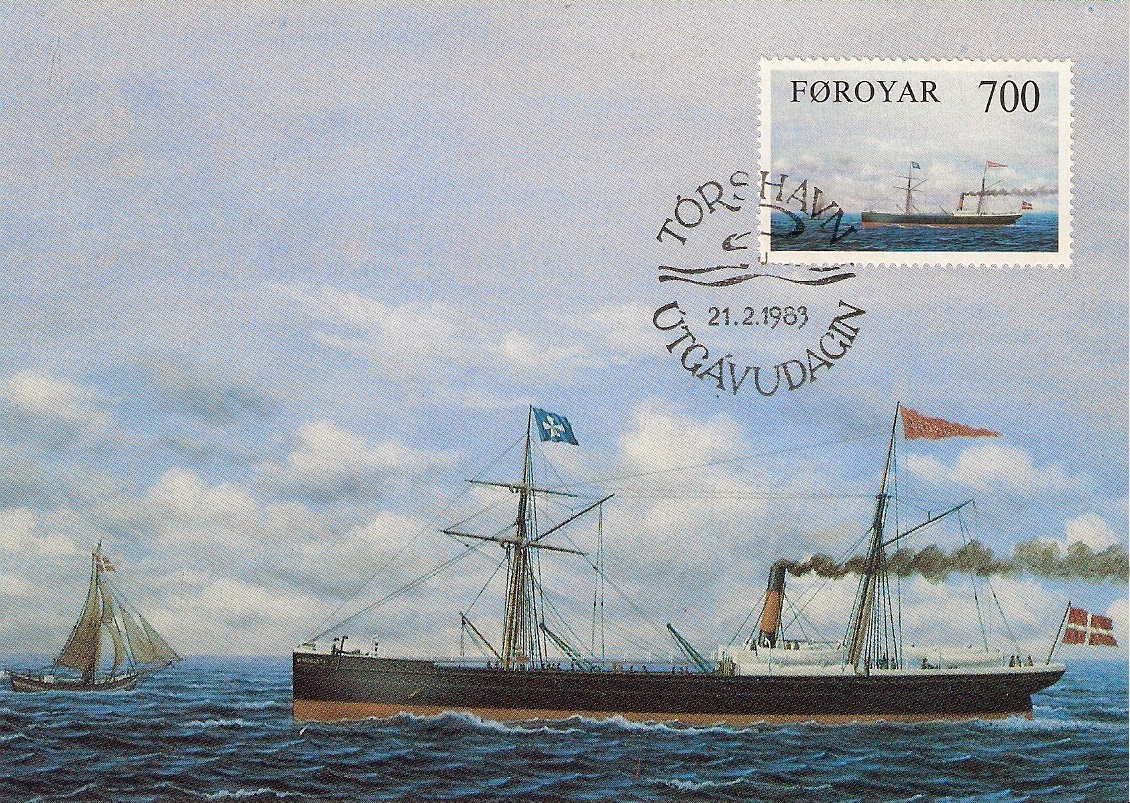 Lastly here is the iron hulled Thyra built in 1866 and used in voyages from Newcastle to Copenhagen and the Baltic ports.  What a pity DFDS no longer run this route, I've only ever been to the Netherlands on their ships from Newcastle. In 1876 she was rebuilt in Copenhagen and continued to journey from there to Leith, Faroes and Iceland, later captured by the Germans in World War 1, released and then eventually broken up in Hamburg, Germany in 1924. (Full history here)


An entry to Sunday Stamps II theme of Ships and Boats hosted by Violet Sky here.
Posted by Joy at 11:47

Fantastic set. I love the fact that they were mail ships.

These are wonderful paintings.
I'm wondering why so many postal services issue stamps of wrecked ships...

A fascinating post. I have worked with the Mærsk company when in the oil and gas industry so it was of special interest to me. Never made it to the Faroes though, just to a FPSO (floating production ship) the Foinaven West of Shetland.
This is a glorious set of stamps although I wouldn't fancy having been on one of the ships.

The painting of the "Laura" is wonderful!

Good for the Savona for rescuing everyone after the collision.
Nice paintings of these ships.

Gorgeous. You have these maxicards?

These are really beautiful so it's odd that they aren't credited to an artist.