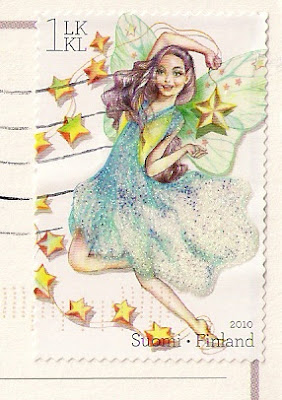 Glitter and fairies who could resist that combination. Unfortunately the glitter does not show up very well on the scan but it sparkles nicely on the postcard that Leena sent me in March 2010.  This is the Star Fairy.  A set of five was issued in January in time for Valentine's Day.  Imagine my delight at the end of 2010 when I received 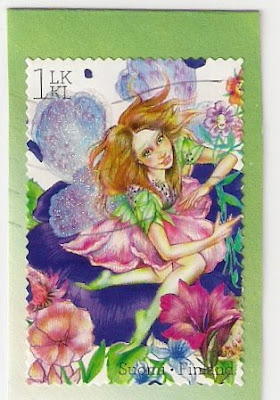 another fairy which Jassica had surprised me with, along with other pretty stamps. Finland have an attractive and imaginative stamp programme which often finds me thinking it would be a wonderful country to specialise in, but I have never got any further than the thought.  If I was specialising then the full miniature sheet of stamps would be a must. 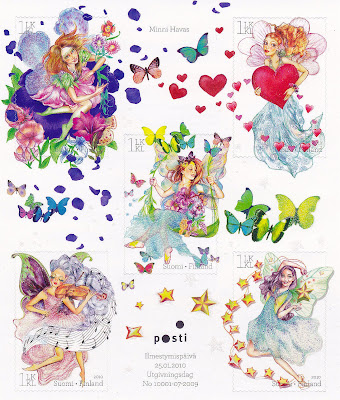 I might frame this rather than putting it in an album. The fairies are the work the young illustrator Minni Havas from Helsinki who works with coloured pencils, usually in fashion design.

The concept of Sunday Stamps, which started last week, is Viridian's Postcards who is hosting here and this week a badge as well....

My favorite is the second stamp where the fairy looks like a flower.

The glitter shows up a little. Now I'll have to go back through my Postcrossing postcards and look for these! The sheet is delightful. Framing would be a good idea. Thank you for participating.

What happy stamps! I've never seen any like that before.

They are lovely, I love the sheet.

Too girlie for my taste, but superb nonetheless! :)

I had to laugh at Dorincard's comment because I am reminded by my husband's remarks whenever he sees flowers, faeries and what-have-yous... but of course, Dorin, you are forgiven. Anyways, I agree, Finland has some of the prettiest stamps in the philatelic world. I was amazed the first time I received a stamp with a 3D motion and it came from Finland - which is so awesome in my opinion!

I always think Finland does the most beautiful stamps. These are gorgeous, girlie or not!