The centre of the FDC cover shows member's of the women's royal army corp celebrating while driving through Trafalgar Square on Victory Europe (VE) Day in May 1945.

This photo shows a serviceman returning home to Oreston in South Devon from his air base in Lincolnshire.  A group of nurses celebrate VE day in Liverpool.

Some evacuees return home to London after a stay in Leicester and the crowds celebrate in London's Piccadilly.  Lots of people headed into London to celebrate and it is estimated that 50,000 people packed into Piccadilly Circus.   The original images on these stamps would have been black and white but have been colourised by Royston Leonard, each photo can take him between 2 and 20 hours work. 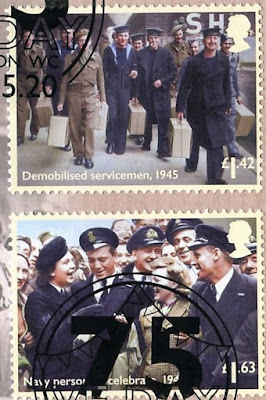 Soldiers and sailors leave a demobilisation centre and a member of the Women's Royal Naval Service proposes a toast during celebrations in Glasgow. 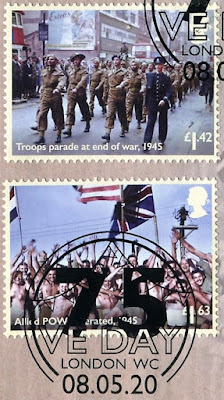 Troops march along London's Oxford Street and lastly Allied prisoners of war at Aomori Camp near Yokohama cheer their rescuers.  Although the war was over in Europe Japan did not surrender until August 1945 and the celebrations were more muted.

The London WC (western central) postmark (above) covers the London areas seen on the stamps.  Royal Mail chose a SW1 postmark which is where Government buildings and Buckingham Palace is located.

What a nice set of stamps to choose for today - and thanks for all the extra info on the stamps. Great postmarks, too.

Wow, that is a lot of reasons to celebrate! Such a great choice for today! And a nice history insight too!

This set is superb. I had seen the stamps, but not in person. The colour seems very natural, and the people... very happy!

A great set of stamps and I agree, the color is beautifully added.

He did a great job on the colourization. Everything looks so much brighter than the muted shades I might expect from that era.

I have not seen these and since our town PO closed the one set up in a local newsagents does not have sets for sale. Guess I'll have to admire this set from afar. I don't remember much about the day itself other than we were sad that our RAF faamily lodgers would soon leave.