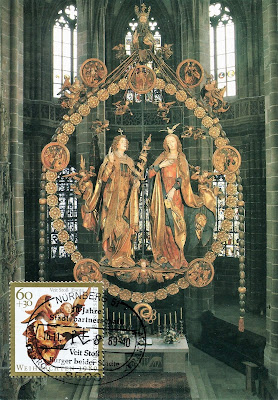 Featured on this Maximum card is the 'Angelic Salutation' which hangs in St Lawrence's Church in Nuremberg at the centre of the choir facing the high altar. Carved in lime wood it was completed in 1518 and shows the Virgin Mary and Archangel Gabriel surrounded by roses and with small angels ringing bells and playing musical instruments
like this one.  It survived the reformation although for many centuries it was shrouded with a cloth, only on display for special occasions, but today it can be seen in all its glory.  There was also a gilded cross but this has been lost.
The reformation is in full swing here and shows a Lutheran Communion Service. The stamp is a detail from an altar panel from Torslunde Church which I believe is now in the National Museum, Copenhagen.
Wearing its winter dress is St Catherine's Church, Port Erin in the Isle of Man.  Built in the 19th Century by a benefactor it is constructed of Manx slate.  The Isle of Man picked 5 stamps from past Christmas issues to reissue in 2013 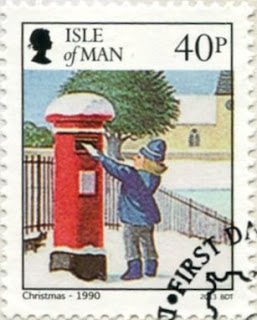 and this one has the added benefit of a postbox with church.  They have cropped the original design but the original (which I don't have) is much better -
The full snowy1990 Christmas set can be seen here. 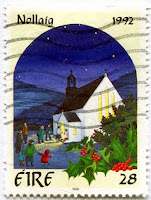 More beauties!
The cropping on the last stamp is curious. I agree with you and I prefer the complete stamp, too.

Yes, the full picture is more interesting than the cropped one.
There is something special about an icon only on display for ceremony - but this one is so big and to have been shrouded for centuries... think of all the people who may never have enjoyed seeing it!

I almost did not realise that the maxi card contained the stamp with the wonderful carving.