Spring is in the air, daffodils are in flower and as we have just had the warmest February on record here so no wonder I heard a buzzing among my flowering heart ivy (sometimes called Paddy's Pride).
Perhaps it came from a beehive
with some bees readying for the busy year ahead or maybe they are still dreaming 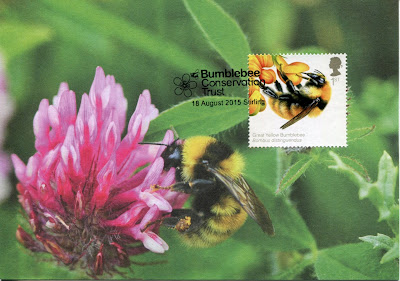 of flowers and clover rich meadows.
The great yellow bumblebee shown here flies over grasslands looking for clover, vetch and knapweed.
maybe it will be joined by a copper butterfly which can be seen in all sorts of habitats but daises are never in short supply.
The Large-Blue is a specialist which is probably why it became extinct in England in 1979 for its grubs feed on a single species of red ant. Fast forward to 2006 and 10,000 eggs were painstakingly   placed by conservation projects in SW England.  Ten years later and 250,000 eggs were laid on wild margoram and thyme plants at reserves in Gloucestershire and Somerset. I wonder who counted them?

Sunday Stamps II prompt this week is the Letter B - here for Bulgaria, bees, beehive and butterflies - See It On A Postcard.

Great selection today. I think the 2015 bees set from Royal Mail has to be one of the most stunning.

Blue being my favourite colour, that Blue butterfly would probably be my favourite one for today, though that Royal Mail bee ain't any less fascinating!

Bees are amazing, and so are your stamps. The first one has very nice colours.

No butterflies here yet but the bumblebees are stirring in our garden.