Time to pitch ones tent and in the Tunisian stamp the tent is on the outskirts of the city of Kairouoan, a UNESCO World Heritage Site. The painter is Yahia Turki (1903-1969)  a modernist artist who has been called the 'father of Tunisian painting' and whose artistic life Tunisia celebrated in 2003 issuing a stamp for his birth date.  Apart from the camel the site seems deserted
but there is a full camp here with this happy group enjoying life together around a scout camp fire.
Tents and fire also make an appearance on this Spanish stamp. I rather like the Scout flag and scarf forming a 75. 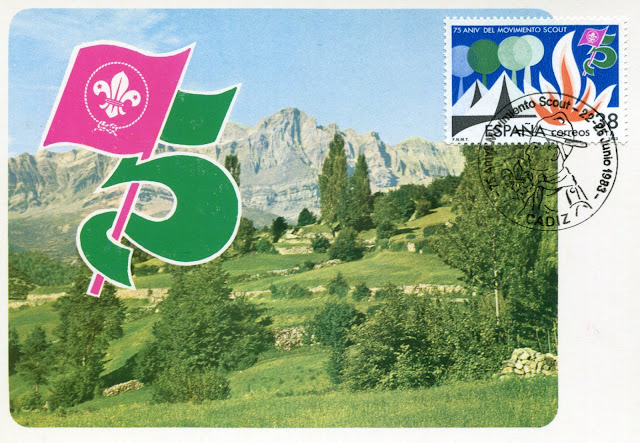 And this looks the perfect spot to set up camp.
Or here under a full moon. 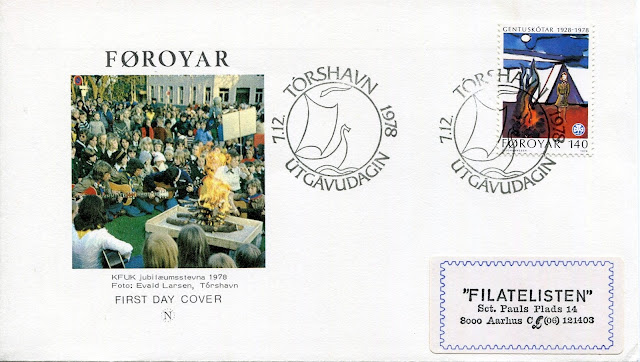 not to forget the numerous guiding songs to be sung around a fire and that does look like a very fancy fire indeed in the photo.  No way are you going to be able to swing a billy can over that
although one may be able to lash something together. I notice from the postmark the stamp above has travelled from Haute-Savoir region of France, another great place for outdoor adventure.
But for a large gathering of people you need a really big tent. The stamp celebrates the centenary of Chautauqua, a movement that brought together entertainment and education for the people, a section of which travelled around the country. The artist, John Falter, remembered as a boy going to the Chautauqua with his mother when it came to his home town of Falls City, Nebraska. He incorporated part of his Falls City home and the nearby water tower in the background of the stamp. 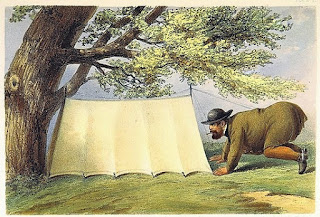 Sunday Stamps II prompt this week of the Letter T - for Tents and Tunisia - pitch up at See It On A Postcard
Posted by Joy at 13:53

so cute those Slovenian stamps! the child in me loves them!

An original theme you chose this week!

I didn't recognise the Spanish stamp at first sight. But I only started to write letters (so, to use stamps!) in 1987.

I don't know if it's the heatwave we're having, but that Tunisian stamps exudes heat.

What a magnificent collection of tents. The only time I went camping with my boys it rained from when we put it up to when we took it down.

An unexpected topic, and I love all the different styles of stamps. Nice mini-collection.