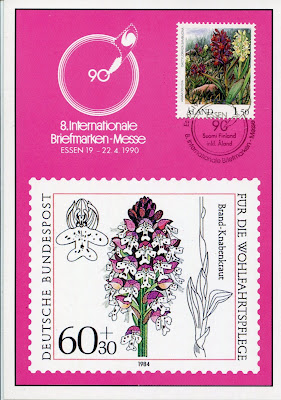 Two stamps for the price of one on this exhibition card produced by Åland. for the International Stamp Fair in Essen, Germany.   The featured German stamp is from the Humanitarian Relief Fund stamps of 1984 featuring Orchids and designed by Professor Günter Jacki.  This is Orchis ustulata, the burnt orchid which flowers in April and May.

The choice of a stamp from 1984 I think is no accident for that was the first year the name Åland appeared on stamps.  From 1984-1992 the stamps were issued by Finnish Post and you could use a combination of both Åland and Finnish stamps on envelopes.  In one of life's ironies today Åland act as agents for Finnish stamps.
I don't think one has to know the language to work out what this is called in the Åland Islands, Adam och Eva.  It is also known as the elder flowered orchid which grows in both purple and a yellow white.   I liked the description of it from Nature Gate which includes this paragraph:

"Elder-flowered orchid is one of the earliest-flowering orchids in the north. Its flowers adorn coppices on the Åland Islands from the end of May, when the queen bees wake up from their winter rest and establish a hive, flying tirelessly around to gather nutrition for the first generation of workers. From the bee’s point of view however it is a fruitless task to visit elder-flowered orchid because it has no nectar or pollen: the plant rather fools inexperienced bees into pollinating it without any reward. Insects learn to beware of cheaters, so evolution’s next step was to create two colours of elder-flowered orchid, red and yellow, which can appear in the same habitat. The red coloured variety is usually predominant in northern Finland, while in the south it is in the minority. The differently coloured varieties usually stay very separate, but sometimes plants that are different shades of orange can be found".

I have never been happy with any of my photographs of bell flowers but the photographer here, Andy Horner, shows how it should be done.  The card also has postage paid image on the reverse 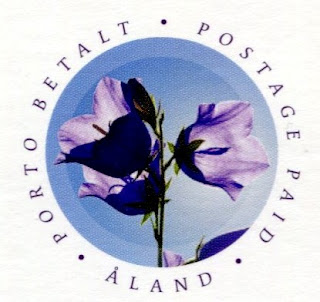 Lastly something tropical
the Giant granadilla (Passiflora quadrangularis).  I have read that this flowering vine can grow over 50 ft in a season, it also produces fruit.

Lovely stamps! Thanks for sharing.

Wow, some lovely flowers on display this week. The Aland stamps are, as usual, stunning.

These are very beautiful stamps. Of course, I love the one with the name Eve & Adam!

Delightful flowers! You seem to have a lot of Aland stamps - and not just this week. The Grenada stamp stands out for me.

Very nice stamps for this weekend's theme! Thank you so much. I thoroughly enjoyed looking at each.