Australia issued two stamps for Remembrance Day in 2011 and also two maximum cards (one of which I have shown before here).  Soldiers, poppies and the poem 'In Flanders Field' are on both. 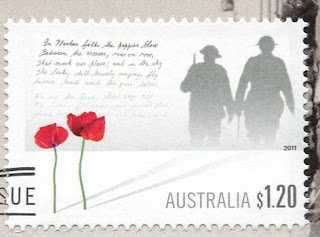 The card is a photograph of Australian soldiers at Bapaume, France. The village was occupied by the Germans at the beginning of WW1 in September 1914 and was within sight of the Australian trenches in the winter months at the beginning of 1917. The Germans gave the illusion of retreat as spring approached and the allied troupes celebrated but the Germans were actually moving 7 kilometres to a better, and newly developed, defensive zone 'the Hindenburg Line'. Four Australian divisions were thrown in reaching the outskirts of the village on 17th March where booby traps and time bombs had been left behind .  The Germans would briefly retake the village in March 1918 but the second battle 21 Aug-3 Sept was the beginning of the end of the war in Europe.

The "war to end all wars" led to another World War and once again countries were destroyed. 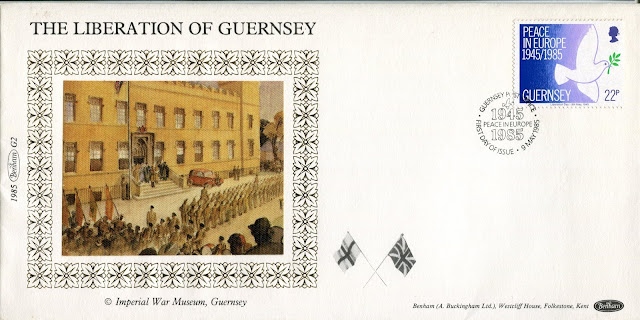 This Guernsey FDC celebrates the anniversary of the liberation of the islands from foreign troops in May 1945, the painting of the scene on the steps I think might be the reading of the official proclamation of liberation and the message from the King which has appeared on other stamps of Guernsey but I like the optimism of the Peace stamp on this cover.
Which as we know did not continue but that doesn't stop people of good heart  promoting peace
The Swedish Peace and Arbitration Association was formed in 1883 and is the oldest peace organisation in the world today.  There is a rather Monty Python moment to the English speaker on the stamp with the name Fred! on the banner of the peace demonstration but the Swedish for peace is fred.

Interesting to see the different countries stamps together - they tell a story - especially Fred!

The Australian stamp is particularly poignant.

Thank you for sharing these moving stamps.

That Guernsey stamps is particularly well designed, in my opinion.