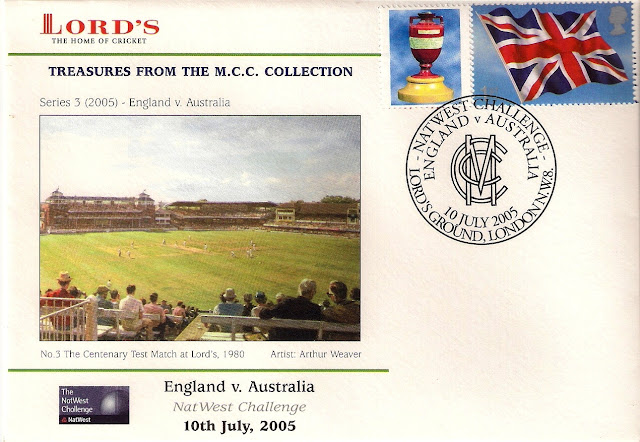 After a rather grim period for English cricket despair has turned to joy only recently and this year's first Ashes match has just finished with wickets tumbling in an unexpected victory.  How could I resist showing this cover from 2005 commemorating our biennial contest against Australia which in 2005, after long decades, we won (still another four matches to go this year).  At the time the cover was issued, on 10th July "the most thrilling series ever", it was all in the future.  We are hoping for a series just as entertaining this year.  Lord's issued a series of covers with the union flag stamp and the Ashes urn label in 2005.  This urn at 11 cm high must be the smallest trophy contested for in world sport.

The painting on the cover was one especially commissioned by the MCC for the 1980 Centenary Test Match at Lords in 1980 from Arthur Weaver, an artist who combined his love of landscape with sport but is possibly most well known for his golf pictures. 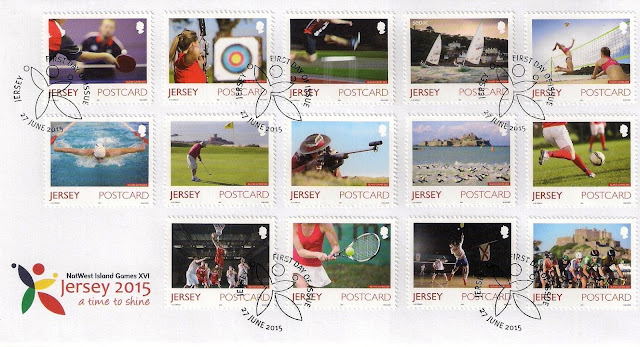 Since the first Island Games were arranged as part of the Isle of Man International Year of Sport the same competition has been held every two years with various islands taking turns to host. This year it took place in Jersey who last hosted the event in 1997.  Between 12 and 14 sports are selected by the host and as can be seen Jersey have gone for the max with  (top) table tennis, archery, athletics, sailing, beach volleyball (middle) swimming, golf, shooting, triathlon, football (bottom) basketball, tennis, volleyball and cycling.

Twenty four islands and 3000 competitors took part in this year event with the theme of 'Bringing Islands Together'. From Scandinavia to the Mediterranean and from the North Atlantic to the Caribbean, young athletes from small islands travelled to Jersey for this unique sporting occasion.  Gotland will be the next hosts in 2017.


An entry to Sunday Stamps II theme - Sporting Events - run over here to see more here
Posted by Joy at 11:26

A lot of stamps for a small island!

Table tennis is my favourite sport-to-practice (didn't do it for years, but it is the only one I was a little good at), so I am happy to see this stamp on it!
Great collection, also of other not so known sports!

There are a lot of stamps in this series. I like the golf and the shooting stamp. My husband and I enjoy those two sports together.

I'm one of those people who can follow the results of some sports and be quite happy (some sports like rugby or cricket could never get into watching) and I remember the excitement of that win 10 years ago.

Love the Island Games - both the stamps and the whole idea of it! It must be challenging (read: expensive and time consuming) for some of these athletes to travel to these islands, but then they understand the challenges better than the rest of us.

Love the cricket card but the Jersey one is superb.