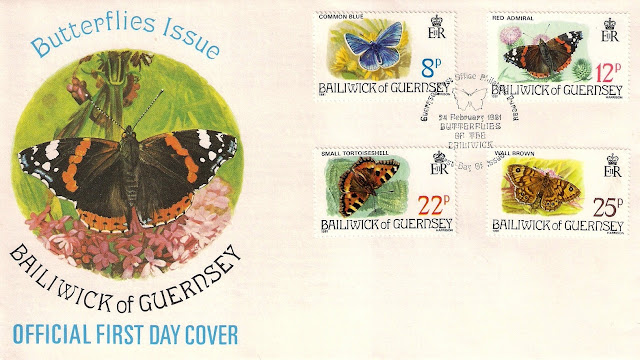 One of the wonderful points of each year is seeing the first bee, the first swallow and of course the first butterfly and knowing that summer is on the way. I will also add hearing the first cuckoo call because how else can one make a wish!  Although the above cover is called the "Butterflies of the Bailiwick" it shows common species for the British Isles.  The Wall butterfly is mainly confined to the coasts (but once found throughout England) it likes to bask on paths and walls. Although nettles are a pest when walking on overgrown paths, for the red admiral visiting these shores and the small tortoiseshell they are a favoured plant. The Common Blue portrayed is a showy male whose female companion can vary in colour from brown to blue but both can be spotted in grassy habitats.

The number of UK butterfly species hovers around 56 or 59 and a few migrants but travelling further afield they are in profusion with over 2,000 species in China and Taiwan 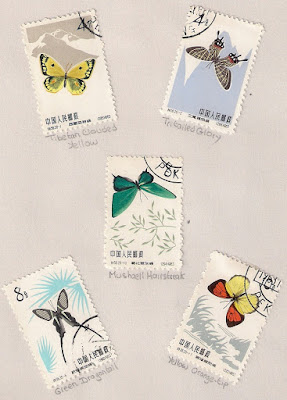 This is part of the China's  'Butterflies' set of 1963 which was voted one of the five classic sets issued between 1960 and 1965 as "Best Stamps in the Years of New China" in 1980.  Interestingly all the sets were of the natural world and included goldfish, chrysanthemums, landscapes of Huangshan Mountain and Peonies. I do not have a full 20 of the  'Butterflies' set and am unlikely to complete it as apparently used and in good condition stamps are hard to find, indeed some values have never been seen.   Information on the designer Liu Shuoren  is equally as elusive.

The common names of the butterflies are written underneath the stamps above however some can fly under different local  names and are from both China and also rare examples from other parts of Asia. It was while looking at their Latin designation I noticed in brackets the name - Matsumura and wondered what it meant.  Thanks to the internet I discovered the world of the "father of Japanese entomology" -Dr Shonen Matsumura (1872-1960), a pioneer of entomological research in East Asia who wrote the first entomology book in the Japanese language, named 1,200 species and published hundreds of scientific papers. 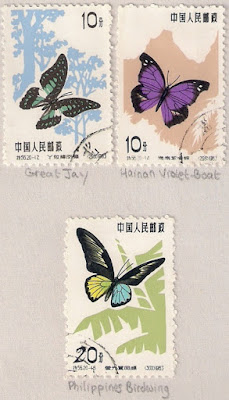 A lot of his work on butterflies was carried out in Taiwan or as it was called at the time Formosa (when it was under Japanese rule)  finding species and subspecies.  Matsumura lived at a time when most of the research was being carried out by Europeans (mainly British and German) which is maybe why the one on the top right has a confusion of names. I have it as Hainan Violet Boat (although recent stamp directories call it a Beck Butterfly) and some entomologies call it Purple Beak.  Its scientific name is also a mix - Libythea geoffroy philippina Staudinger (named in 1889).  The bottom stamp is the iridescent Philippines Birdwing a subspecies (named by Matsumura as Troides magellanus sonani) of the Magellan Birdwing which was in turn named in honour of the explorer Ferdinand Magellan who was killed in the Philippines in 1521.

These stamps are stunning - and they do look like the butterflies are floating, perhaps because of the unusual angles some of them are placed at on the stamps.

I am still trying to get my head around 2,000 species of butterflies in China/Taiwan!
I like the Chinese set for how the butterfly dominates over the background and the lettering is so small.

Wow! Excellent butterfly stamps. I'm now Google'ing about the Philippines Birdwing, which is from my home country. It's fascinating how it seems to have different colors on the symmetrical lower wings -- or perhaps it's just a mistake in printing?

I used to collect butterfly stamps - they are among the most colourful and attractive produced. Iot is so sad that our British species are diminishing in numbers - both numbers of species and numbers of butterflies.

I have approx 50 butterfly stamps from nine or ten different countries but none of these splendid stamps.