The leaves are falling, time for a walk in the woods
with the burnished autumnal colours crunching underfoot leading along winding pathways.
Perhaps its time for a mushroom hunt. On the left the delicious chanterelle and on the right Boletlus edulis, the cep, which is sometimes called a penny bun in England but the Facit stamp catalogue has it listed as Karl Johan which intrigued me. It seems the reason is the French born King Charles XIV John (King of Sweden and Norway) popularised its use and cultivated it in the grounds of his residence, the Roserberg Palace and so it is named after him. 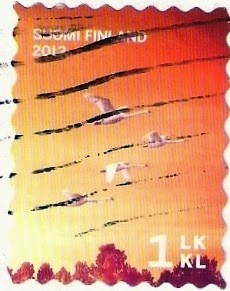 with the added magic of flying swans

This is part of a five stamp miniature sheet issued in 2012 called 'Autumn Dream' described as "surrealistic" it is possibly a vision of the perfect Autumn.  The full dreamlike sheet can be seen here

I love your choice, what a beautiful colours. Well, I'm fond of autumn colours.
I like specially the Scarecrow.

I haven't seen any of those 2012 Finnish stamps. I now know that they do an autumn series every year. I went for a walk in the woods yesterday and it was almost like that German stamp.

When I see stamps like these and especially the fungi I cannot understand why the UK hasn't issued an autumn series.

What a beautiful selection, the autumn leaves make such a great design. I wonder why we don't have that as a design in the UK.

These are all very beautiful stamps. I like the colors. Autumn is such a beautiful season. I really enjoy to go outside and see the colorful forest. Autumn is my favorite season.
In Austria I have never heard of seasonal stamps.

We are having great color this fall. I wish I could buy some fall leaf stamps.

I love the delicate colours of the Åland stamps though of course they are all very beautiful.