My first thought on seeing this Swedish Post Bus was how I would love to get behind the wheel, although to be perfectly honest it was really my second thought because the first one was - whoa no way - what is that contraption?  What would have skis on the front. half track rear wheels and be topped it off with little curtains on the windows?  The answer was a 1923 Post Bus manufactured by  Scania-Vabis, a Swedish truck and car manufacturer from 1911 to 1968.  There was no way snowy conditions were going to stop the Swedish post getting through.

This is an  Åland Islands Exhibition Card from when they took part in the  October 2013 Norrtälje Stamp Fair in Sweden.  For each Stamp Fair Åland Post attend they produce a unique Maximum Card, which I think is normally on the Europa theme of the year, and of course last year it was the Postman's Van.  I seem to remember that this year they are doing clock towers which chimes nicely with this year's theme of musical instruments.

For the Paris Salon d'Automne Stamp Fair (which takes place every year in the first half of November) Åland Post featured a100% electric vehicle the 'Be Sun', manufactured by Ligier, one of whose specialities is microcars.  With a top speed of 45 km/h it means that in some parts of Europe the Be Sun can be driven without a licence. Costing about €10,000 it can carry 200 kg in its rear pod so plenty of room for post (they also do a pick up version). Ligier sold 110 of the ones portrayed on the post card to the French Post Office.

Going back in time to some early microcars - 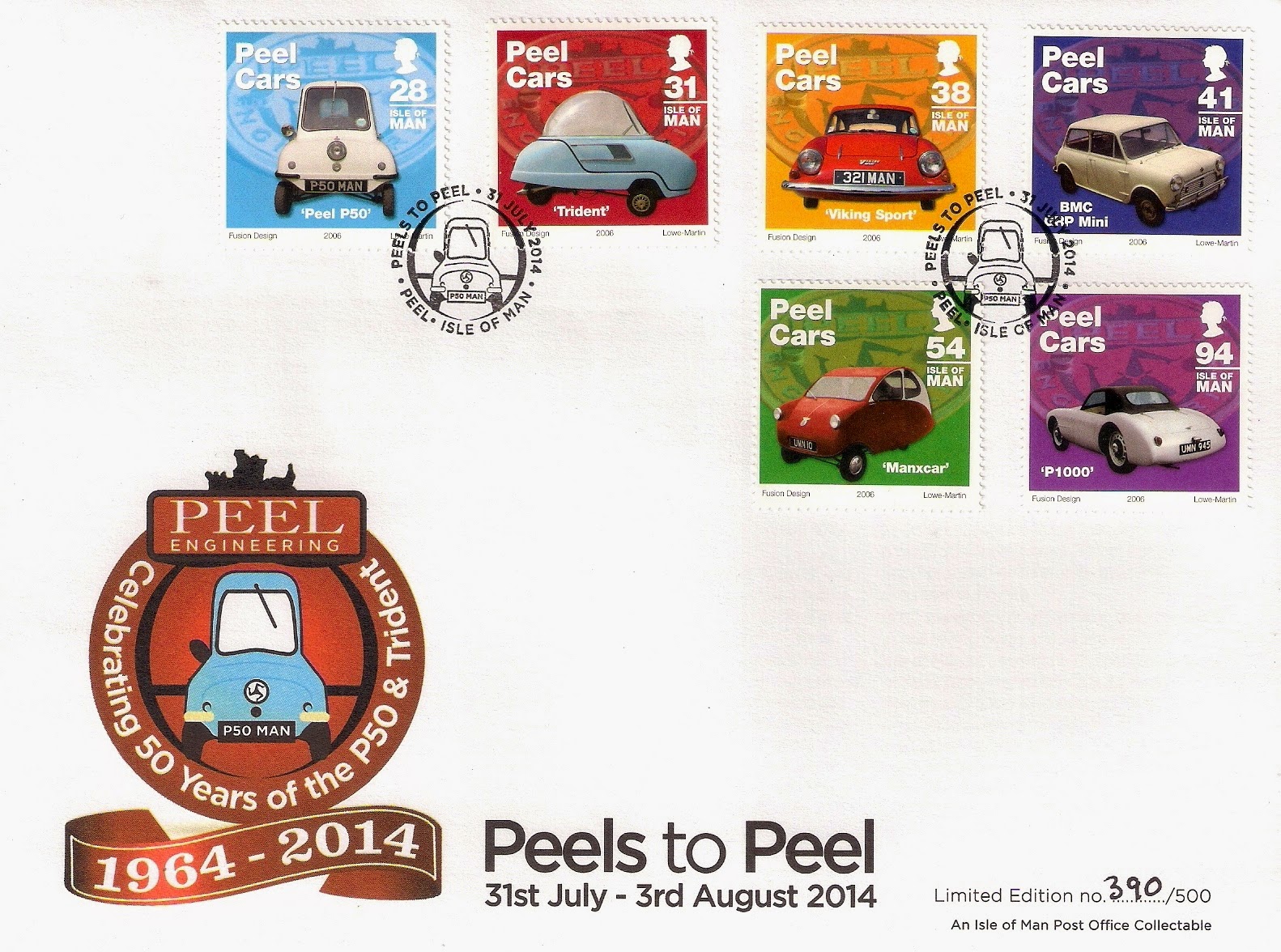 these made their journey back to the Isle of Man this year, the place where they were originally manufactured by Peel Engineering. Their destination was the Manx Transport Heritage Museum based in the town of Peel hence the event name, 'Peels to Peel' Festival'. 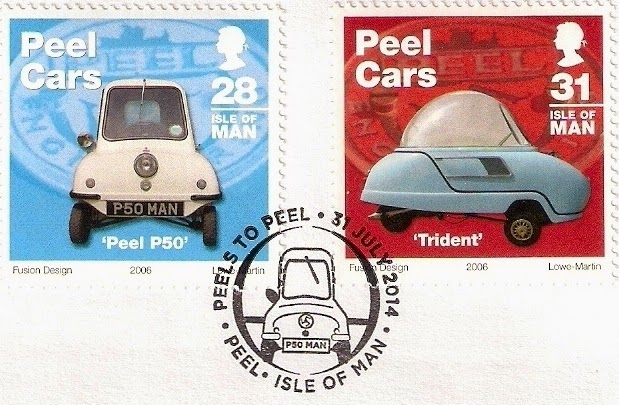 Owners of the P50, Viking and Trident models travelled from the mainland to join up with those on the island and a full schedule of events took place over three days to commemorate fifty years since most of the Peel cars were made. (The stamps used on the cover were a set originally issued in 2006).  Peel Engineering were a boat builder who started to work with a 'new' material called glass-fibre in the 1950s.  Being based in the Isle of Man it is no surprise that as glass fibre developed they started to produce a successful line of  motor cycle fairings including ones for the motor bike legend Geoff Duke. After developing an unsuccessful three wheeler car prototype in 1955 Peels tried again in 1962 to target the city small car market and designed a single seater called the P50 (28p stamp above), the first production car ever manufactured on the Isle of Man which also currently holds the world record for the smallest automotive ever to go into production (54 inches (137 cm) long and 41 inches (104.1 cm) wide, weighing 130 lb (59 kg).  It is thought that about 28 of these survive today.  Encouraged by the sale of the P50 Peel Engineering developed a two-seater model known as the 'Trident' (31p stamp above) which had the same 50cc engine as the P50.  Those of us of a certain age would call these bubble cars.  Today about 30 Tridents still survive.

Around 1966 Peel Engineering developed a fibre glass body shell aimed at the 'kit car' market and latched onto the fact that a large number of BMC Minis were starting to suffer badly from corrosion. The 'Viking Sport' (38p stamp) used the running gear and components from a standard Mini but had a Sports GT body.  Today the Viking Sport is a very rare car with only seven known surviving.  The 41p stamp shows a fibreglass mini built under licence in Chile for the manufacturer of the mini (BMC), who contracted with Peels for their expertise in fibreglass to provide production tooling for the plant.

The early days are shown on the high value stamps - the 54p stamp shows the prototype that never went into production.  The doors were pivoted in the bottom rear corner, a third door gave access to a flat 16 cubic feet boot space which also had a trap door for access to the engine (a 322cc British Anzani twin cylinder two stroke), and that is not all for it had a foot well fitted to allow two children to be carried behind the main seats. The P1000 on the 94p stamp was Peels first production body shell, a 'kit car' designed for fitting to a Ford 8/10 or Morris 8 chassis, in all about 500 were sold.

No rust and 100 miles to the gallon what do you think? See a Trident and a P50 being driven here

The Peel stamps are magnificent.

Wonderful! The surviving cars must be rather valuable. I wonder how safe the cars would be in heavy freeway traffic. If driven only in the city, it might not be such a problem.

Those are interesting variations of cars and vans. I never saw one with skis before.

I think I would feel too claustrophobic in one of those little cars that even the 100mpg would not be favourable.

Nice stamps, beautiful FDCs, and those Peel cars I think really funny. Thank you for sharing these, and for mentioning the link to youtube. Funy to see them drive,. and the enthousiasm of the Peel P50 and Trident driver/owner is delightful!

I love the stamps from Aland. They are so original!