The 1920s were a period of severe drought in central Australia and to raise money to help the local population the area mission established a craft industry where aborigines made boomerangs with burnt pokerwork designs and wooden plaques decorated with plants, animals and the landscape of Central Australia.  Albert Namatjira was one of these and would received his first commission at this time which was for five wooden plaques.  He continued to work in these mediums but the need to earn money to support his family meant that he also worked on cattle stations.  In the winter of 1934 the watercolourist Rex Batterbee and fellow artist John Gardner put on an exhibition of their paintings of the MacDonnell Ranges at the Hermannsburg Lutheran Mission where Albert Namatjira saw and studied them, showing such interest that the Pastor at the mission gave him a set of watercolour paints.  In the winter of 1936 Batterbee returned to the area and Namatjira acted as his guide to the scenic areas of the tribal lands of Western Aranda offering his services as "camel boy in return for painting lessons".  Batterbee was amazed at his rapid progress and understanding of a medium that would take some people many years to learn. 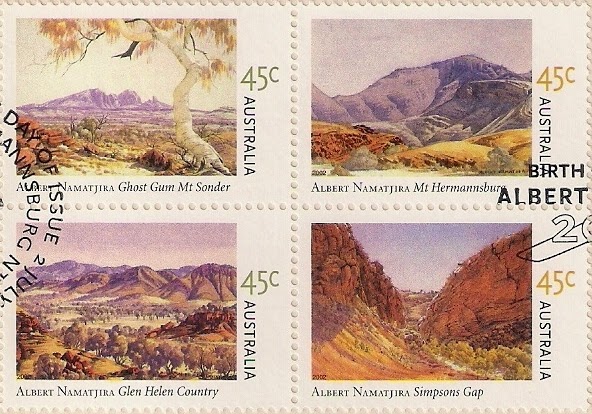 He would go on to produce about 2000 paintings which he would always paint plein air on his many walkabouts with his family but only in the winter or dry season due to the famously severe Australian sun in the summer.  The ochre tones not only represent the landscape in western artist style but also are influenced by Aboriginal tradition. These were not easy times for the indigenous population as the aboriginal people lived under restrictive legislation that made them wards of state and were not given Australian citizenship until 1968 (Namatjira died in 1959) but Namatjira would become the first named Australian aborigine to have his portrait appear on a postage stamp.  The Hermannsburg School of Artists website shows how Albert was the first of many indigenous artists who would portray their love of the landscape in this way here.

Someone else who was always travelling (but in Europe) and painted landscape watercolours was Edward Lear but he is probably better know for his illustrations and verse
The 20th of a family of 21 children and rejected by this mother he was brought up by his sister Ann. Due to illness he did not go to school and started to earn his living as a painter in the yards of coaching inns. By the time he was 16 he was working as an ornithological draughtsman and it was while working at the Zoological Gardens in London that he was introduced to the Earl of Derby who at the time was looking for an artist to make drawings of his extensive menagerie at his family home. It was during his six years at Knowsley that he wrote the first of his limericks which were for the children of the household and illustrated with the birds and animals he knew so well. The damp climate of north west England made his asthma and bronchitis worse so with Lord Derby's help he went to live in Rome and would spend most of the rest of his life abroad traveling, painting and drawing.  Lear depended upon letters to keep him in touch with family and friends and the 27p stamp above shows one of his signatures portraying himself as a bird.  The 32p stamp below is from an alphabet book. For a small taste of his whimsy and other works see this blog post here

the australian set would have been great for the landscapes theme also; it always fascinates me with what ease some people create such beautiful paintings

I especially like the first set--the paintings look very attractive on the stamps, and knowing the artist's history makes them special.

What a talent Albert had - magnificent paintings.
I regret I never saw those Lear stamps.

Lovely illustrations landsapes on stamps.greeting from Belgium , tomorrow it is national day in Belgium.

Both sets are admirable in different ways. I enjoyed the story of the camel boy painter, and Lear has always been a favourite of mine.

My father is an artist and he says yes, watercolors are challenging! thank you for sharing two lovely sets. I would like to see Albert's actual paintings. thank you for participating.

Very contrasting sets but both fascinating in their own ways.

I've been a fan of Lear for many years.
Now I think I would be a fan of Namatjira - for very different reasons) now that I know about him. And his artwork shows up very well on the stamps!