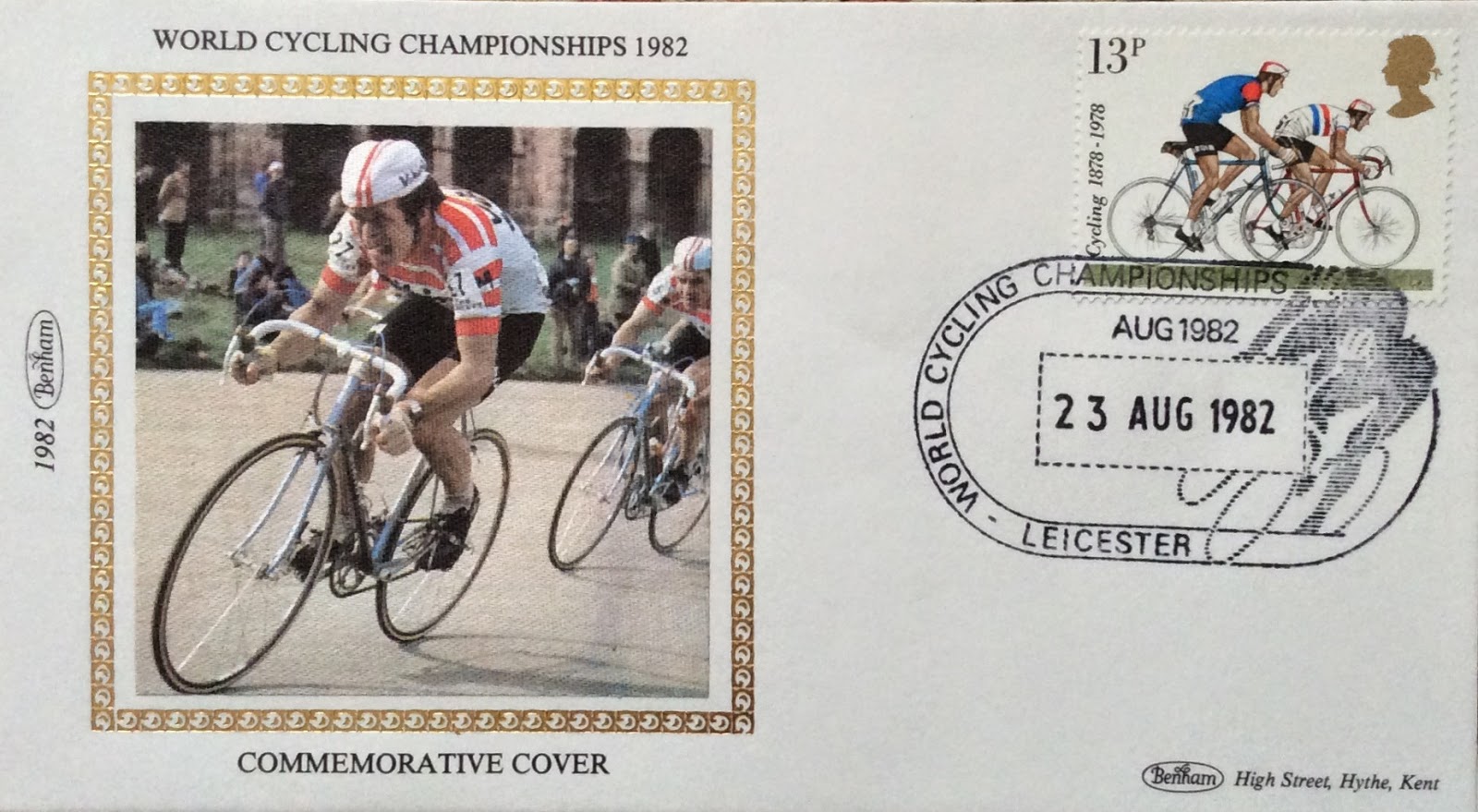 This year's Tour de France Grand Depart in July  is from the north of England which will be just a short trip over the Pennines for me and I'm overexcited about that fact so I've chosen a cycling theme for Sunday Stamps. The above cover uses one of the 1978 Cycling stamps which featured what was then called The Milk Race, a road race named after the sponsors, the Milk Marketing Board.  The cover itself  is a commemoration of the World Cycling Championships which in 1982 were split between Goodwood and Leicester. (The distinctive striped jersey on the stamp is that of World Champion which will be worn for the year of racing by the winner of that accolade).  Leicester twice hosted the UCI World Championships in 1970 and 1982; both bikes and clothing have altered radically since then.
Here is Bradley Wiggins winning Olympic gold in the Men's Time Trial. Royal Mail issued stamps for all the gold medallists in super quick time reaching 500 key post offices by lunch time the day after the gold medal win, at least one of those post offices would be a branch in the winners home town. The year of 2012 was an amazing year for Wiggins as he also won the Tour de France 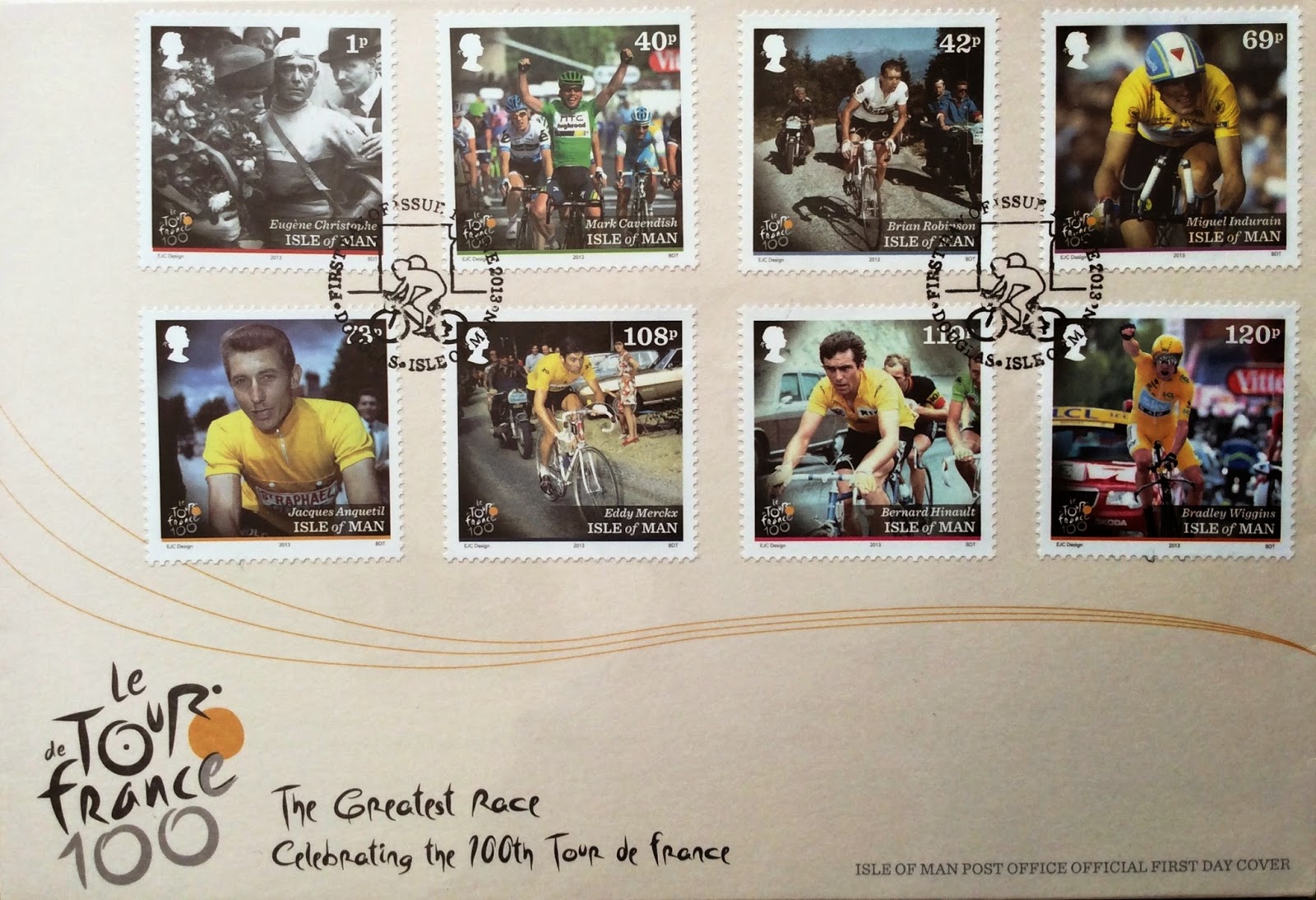 and the Isle of Man included him on their set celebrating the 100th edition of the race in 2013 ( bottom right).

The eight stamp images portray the great champions, starting on the top row with
Bottom Row L to R

For more than 50 years the Isle of Man has held the International Cycling Festival which has attracted many Tour de France riders to the island, and some of those featured on the stamps.  Its love affair with cycling continues for they are going to issue stamps and postcards for the Tour this year calling it "The Road to Paris". The ultimate destination being the iconic finishing point of the Champs-Élysées circuit when no doubt every Manx person will be urging Mark Cavendish to speed to the finish line and win the stage as he did his in his record breaking four years in a row (2009-2012).

We could not have stamps of gold medalists here--no living persons on U.S. stamps.

I love bicycles - although I'm a slow cyclist - and I love these stamps!

Ah yes, the Milk Race; I had forgottten that. You’re right, these stamps really show the change in fashion and technical details.

A great collection of stamps. I assume you are going over the Pennines to see the start? Have a great time.
thank you for joining in.

I never succeeded in obtaining a Gold Medal stamp at our local Post Office.
Those Isle of man stamps are a superb set. I surprised myself by knowing almost all the riders.

I've gradually become more interested in the Tour de France ever since it passed us in Hampshire all those years ago. My husband tried to explain the tactics to me once.

i always get extra excited when it comes to anything bicycles-related, so these stamps were just a thrill and treat! love them!!

How interesting! What a great collection. xoxox

Balance your spiritual energy and get in harmony with your soul by practicing these Radha-Krishna meditations.


Sri Gita Govinda
-A book written in the 12th century, this is a description of the intimate loving affairs of Radha and Krishna
http://www.mediafire.com/view/keqr4lqp7wr1rru/Sri_Gita_Govinda.pdf

Ananda Vrindavan Campu
-This is probably the most poetic and intimate portrayal of Sri Krsna’s life in Vrndavana that has ever been written.
http://www.mediafire.com/view/k9j3ldwbt17be3b/Ananda_Vmdavana_Campu.pdf

Prayers of Service to Radha and Krishna (Sankalpa Kalpadruma)
http://www.mediafire.com/view/lvkqsro3sbzm249/Visvanath_Cakravarti_Thakur_Sankalpa_Kalpadruma.pdf


And the following four are taken from Visvanath Cakravarti's Camatkara Candrika, a 300 year old scripture that talks about the love meeting of Radha and Krishna:

The Meeting in the Box
http://www.mediafire.com/view/c81a7cp43n5v6aj/The_Meeting_in_the_Box.pdf

The Meeting of Sri Krishna Disguised as a Female Doctor
http://www.mediafire.com/view/hgomrnem7829pda/The_Meeting_of_Sri_Krsna_Disguised_as_a_Female_Doctor.pdf

The Meeting of Sri Krishna Disguised as a Female Singer
http://www.mediafire.com/view/gyuboduhn8dvdml/The_Meeting_of_Sri_Krsna_Disguised_as_a_Female_Singer.pdf

The Meeting of Sri Krishna Disguised as Abhimanyu
http://www.mediafire.com/view/911h9qoxn4ca027/The_Meeting_of_Sri_Krsna_Disguised_As_Abhimanyu.pdf


And lastly, we have a very amazing scripture which describes the 24 hour daily loving affairs of Radha and Krishna in Vrindavan, called Bhavanasara Sangraha. This book is now available on Amazon for Kindle, for only $3.49

The above book can also be read on your PC using Amazon Kindle for PC, download here for free:
http://www.amazon.com/gp/feature.html/ref=kcp_pc_mkt_lnd?docId=1000426311

Disclaimer: We are not affiliated with ISKCON in any way whatsoever. ISKCON, or "The Hare Krishna Movement" as it's popularily known, is a radical and extremist distortion of the original Radha and Krishna dharma from ancient India. The author of the above book Bhavanasara Sangraha is no longer affiliated with ISKCON either, having cut all ties to ISKCON a few years ago.