I can never make up my mind which is my favourite stamp in the Europa stamps issued each year so never vote on the Post Europ site.  I think this year might be the exception as this set of Cyprus stamps designed by Ioanna Kalli  for the National Musical Instrument theme are so beautiful.

They show the pithkiavlin (Cyprus flute) which are made from reeds, each one has its own sound depending on the diameter and length.  It is the most ancient of Cypriot wind instruments and they have been found in archaelogical excavations such as at the Sanctuary of Aphrodite in Paphos, linking it in ancient times with celebrations and feasts in honour of Aphrodite and Apollo. The other stamp shows the laouton (lute) the principal musical instrument of Cyprus which is often accompanied by the violin in Cypriot dance melodies.
Next is the most famous flute player, the Hindu god Lord Krishna who is often portrayed as an infant or young boy playing the flute.  The stamp description in catalogues is "flute player and dancer" but perhaps it is Krishna and his consort Radha.  The stamp is for his birth anniversary which is one of the most important festivals for Hindus of the year.
Marching around the corner is this 'Children's Band', a painting by Tadeusz Makowski (1882-1932) which hangs in the National Museum, Warsaw. Makowski was a painter, illustrator, graphic artist and friend of Pablo Picasso.  He originally travelled to Paris intending to spend a year there but never returned home to Poland.  This painting of 1922 was made  in Brittany when he started to visit the French countryside and would lead to a series of painting with musical subjects in the late 1920s. Although he painted French landscapes there was always a feel of Polish villages.  (I apologise for the quality of the pictures but after a fight with my scanner I have had to take photos with my ipad which I need more practice at lining up).  From the fifes and drums to

the beat of Africa.  Here you can take your preference sit down and play the drum (left) or  put the strap on your shoulder (right) and beat out a rhythm. 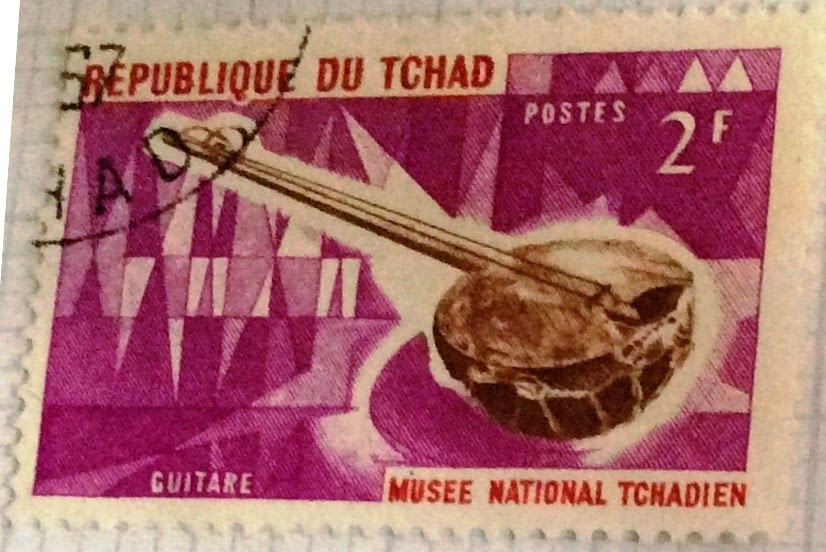 Chad has an amazing variety of musical instruments and Northern Chad is known for its drums and stringed instruments.  As can be seen from the stamps these instruments portrayed are from the Chad National History Museum which was established in 1962 and has/had a notable collection of musical instruments. Unfortunately due to the instability of the country many of its artefacts have been lost or looted.  Despite this it has moved to new premises recently and someone on Trip Advisor has written  "If you have nothing to do in N'Djamena and want to take some pictures in a city where outdoor photography is forbidden, this museum is the place to go".

The Cyprus stamps are very interesting! I like the flowing lines. The flute is like Pan pipes, which are ancient indeed.
Thank you for joining in this week.

great selection! you are right about europa stamps, impossible to choose the best ones.

Great variety of musical stamps. I always like seeing unusual old instruments. The Polish painting is my favorite.

I think the stamps from Cyprus are really beautiful.

The Cyprus stamps are beautiful. I like the way the colour pops out of them.
I also had the Chadian stamps (though I didn't include the guitar)

The stamps from Cyprus are really beautiful (however, they hadn't my vote in the competition). Your selection today wins in originality, sure. How amazing stamps!

As a non-musician I learn a lot from stamps like these. Cyprus gets my vote too.

those Cyprus stamps are so beautifully designed! Like 'flowing with the music'! Love them!!