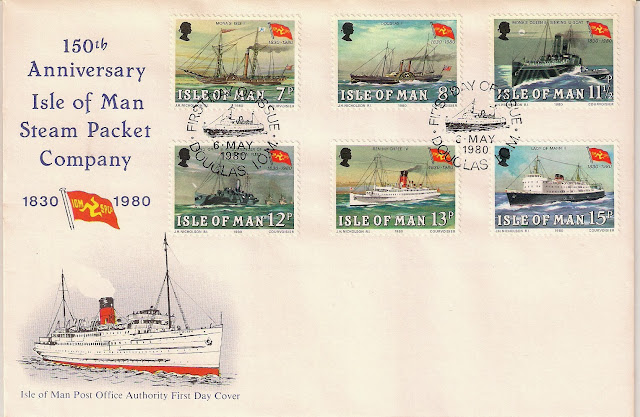 I was spoilt for choice for this week's theme of ships as not only was last month's GB stamps issue on the Merchant Navy but I was surprised to discover I had more ship stamps than I thought. In the end I decided on a set of stamps from the Irish Sea.  In the early 19th Century sailing connections were mainly confined to the summer months and come wintertime were poor and unreliable. The expanding population of the Isle of Man demanded something more permanent and as a result the Isle of Man Steam Packet Company was formed and runs to this day. 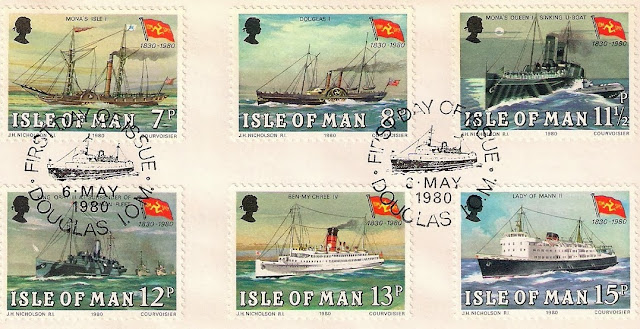 Their first ship in 1830 with its spacious cabin accommodation  was Mona's Isle I (7p) and remained in service until 1851.  Next is the 8p stamp and Douglas I (built in 1858), which was then the fastest ship afloat and had the unusual distinction of serving on both sides of the American Civil War; under the name 'Margaret and Jessie' for the Confederates and then captured and sold to the Federal Navy where she became the USS Gettysburg.  The 11½p shows Mona's Queen II which was involved in dramatic action in World War I, as the stamp shows.  In February 1917 on passage from Le Havre to Southampton the crew spotted a U-Boat surfaced. In spite of a torpedo attack the captain decided to ram, and succeeded in smashing its hull with a paddle-wheel.  Mona's Queen returned to conventional duties after the war and served as the last paddle-steamer in the company's fleet until 1929.  The Isle of Man Steam Packet Company is fond of certain ship names so a later Mona's Queen saw equally dramatic action in World War II.

This takes us to the bottom line of stamps and the 12p value King Orry III built in 1913 and the first with geared turbines driving twin screws. During the First World War she was used as an armed boarding vessel and was present at the surrender of the German High Seas Fleet.  Between wars she returned to the Company but resumed war duty in 1939 and was sunk at the evacuation from Dunkirk in 1940.
13p stamp is the Ben-my-Chree IV (Manx for woman of my heart) a twin-screw turbine steamer. Launched in 1927 she served as troop transport during the Second World War and rescued 4,045 troops from the beaches at Dunkirk. On D Day she was part of the invasion fleet to Normandy. After the war she remained in service until 1965.
Lastly the 15p value is the Lady of Man II which at the time of the FDC in 1980 was the latest ship to join the fleet.  Today their latest ship, bought in 2009, is a wave-piercing high-speed catamaran, the Manannan which looks suitably futuristic however I always have a soft spot for paddle steamers.

The stamps were designed by the Manx artist John Hobson Nicholson (1911-1988) who also designed Manx banknotes..

As I have mentioned twin screws twice in the descriptions above I thought this would be a great opportunity to show an unusual stamp I received from Slovenia.  Because it was stuck on the envelope on its side at first I thought it was a cork screw, wine being foremost in my mind,  but the right way up 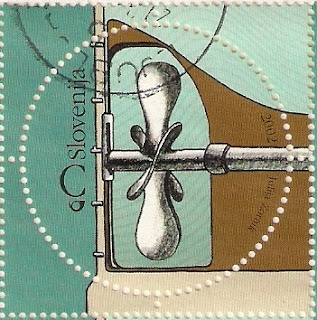 it celebrates the patenting of the screw propeller by Josef Ressel Twin screws have two propellers, one on either side of the keel, that usually revolve in opposite directions.

It is interesting to see the evolution of the ships and read about their history.

Very brave of an unarmed vessel to ram a U-boat! thank you for your commentary and you contribution. I think of wine a bit too.

Wine? Did somebody say wine?

Also I found it interesting to learn a little Manx since it's so similar to Irish. "Bean mo chroi" would be the equivalent.

I think I've seen some of the ship stamps, they make a very nice set and cover. The Slovenian stamp is amazing and one I would've otherwise not seen, thanks for posting that one.

an amazing item to have! and great details you have provided...though I must admit I do struggle a bit with terminology here :)

and what a detail to depict on the Slovenian stamp! Love it!

I am seriously impressed that you had a twin screw stamp!! Great history with these ships.

Post of the week for me with the interesting detail to match each stamp. The Slovenia stamp is a gem.

The Isle of Man does some wonderful stamp issues. This one is great.

Great info about ships! The stamp pic is too good.