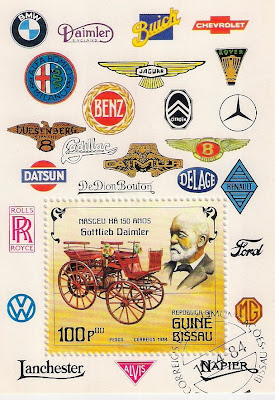 I do like a logo and many famous car badges have been used on this sheet, each symbolising its own unique history.  The commemorative sheet was issued for the 150th Birth Anniversary of Gottlieb Daimler (1834-1900),  It was his invention of the high speed petrol engine that made the car possible. He founded the company Daimler Motern Gessellschaft with his partner Wilhelm Maybach and after experimenting with 2 wheeled vehicles, then a stagecoach and ultimately produced their first car for sale, which is the one shown on the stamp. It does not look too dissimilar to a stagecoach, how do you fancy rattling down the road in this?

The first gearbox was produced by Louis Renault (1877-1944) and the automotive industry was on its way. The early lead in production by the French has resulted in us using a lot of French expressions, such as chassis and coupé, they also knew you would need a roof 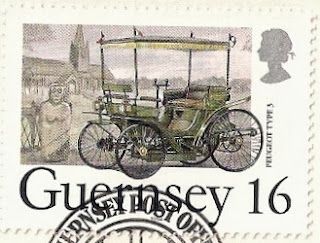 This is a Peugeot 'Petroleur' Type 3.  It was brought to the island of Guernsey in 1894 by Major A Thom, a Guernseyman living in Switzerland.  The Major and his horseless carriage spent a couple of weeks on the island giving rides to people and racing the electric tram.  Although the first car to be resident on the island was not until 1900 the Guernsey Post Office celebrated the centenary of the appearance of the first car on the island with a set of stamps. 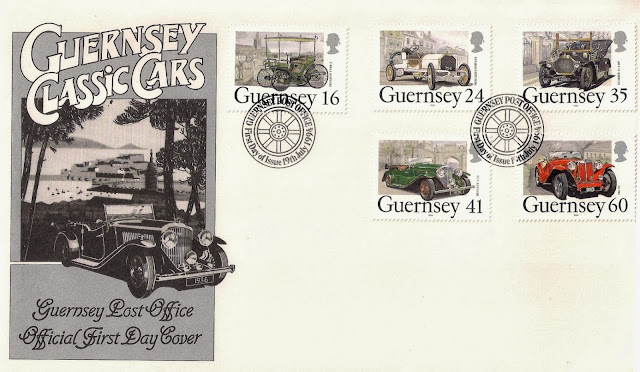 The artist, Robin Ollington depicts the cars against Guernsey backgrounds of the relevant periods.  The top line of stamps are the 'Petroleur', which we have already met, and was capable of 12 mph (I can't spot the 'extra' that was available at the time of a whip for chasing away dogs).
Next is the 24p: 1903 Mercedes Simplex which looks a far racier number. The Mercedes name was first used on German-built Daimler cars in 1900.
35p: 1906 Humber.  This 14.4 hp four cylinder tourer has a top speed of 35 mph which happens to be the island's speed limit.
Bottom row:
41p: 1936 Bentley. This 4¼ litre sports tourer had a reasonably light body and could reach 90 mph.
60p: 1948 MG TC.  During the1930s the MG Midget became Morris's most popular model and was the first quantity produced small British sports car. The TC Midget was introduced in 1943 being a slightly improved version of the pre-war TB. Its top speed was 78 mph.


An entry to Viridian Postcard's Sunday Stamps theme of - cars

Fine set; good to see the Midget among them.

I'll take the white one please. :-) It looks like the starting car for Chitty Chitty Bang Bang.
thank you for joining in this week.

Well done the French for spotting the need for a roof - especially today, I might add.

those are really very beautiful stamps + thanks for sharing those interesting bits of car history + trivia :)

great post, the peugeot looks so peculiar thank you for showing :)

Such lovely ones! It is hard to choose.