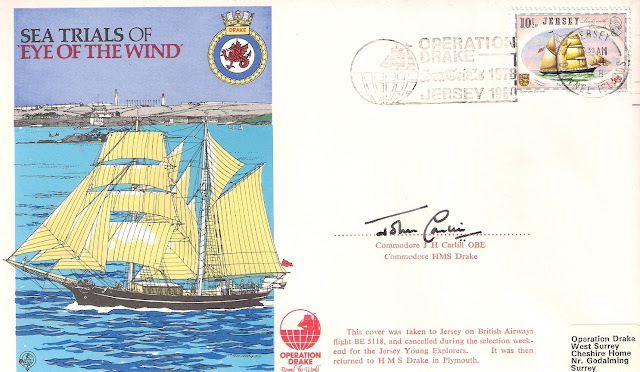 This week's Sunday Stamps theme gives me another excuse to show one of my 'Eye of the Wind' covers (artwork by Anthony Theobald). The ship was a 150 ton brigantine built in Germany in 1911 as the 'Fredrich' carrying salt from Germany, hide from Argentina and China Clay from Cornwall. Sold in 1923 to a Swedish family who owned her until 1958 when she carried cargo in the Baltic and North Sea.    Severely damaged by fire in 1969 she was bought by a sailing enthusiast in 1973 and rebuilt and later that decade was altered amongst other things to accommodate a laboratory and a dark room.  The cover carries the badge of HMS Drake, which is not a ship but a naval base at Devonport where the Eye of the Wind was fitted out ready for its journey around the world setting off from Jersey. 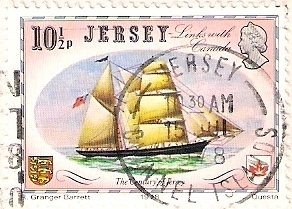 The stamp used is one of the 1978 "Links with Canada" set showing another brigantine the 1866 'Century' built in Jersey.  On her maiden voyage from Caspé, Canada she was caught in a hurricane and dismasted. After repairs she was used by Robin and Co for the triangle run leaving Gaspé with dried cod, then cargoes from South America of rum, molasses and sugar and head for Jersey from where they would return to Canada with European manufactured goods.  The Century refers to the century of the owners  Robin and Co which lasted a great deal longer than that. The ship by comparison had a brief life.

Here is the man the 'Operation Drake' expedition of 'Eye of the Wind' was named after the great seafarer
Sir Francis Drake whose circumnavigation of the globe (1577-80) they were emulating. The stamp was designed by Marjorie Saynor who painted the portrait for the stamp.  I think she has used the famous Thomas Hilliard miniature as her inspiration.
And here is an Elizabethan galleon similar to the Golden Hind which Drake sailed the world. Galleons were for the age highly stable, fast and manoeuvrable vessels and of course in our own age always the stars of pirate films or perhaps co-stars with Johnny Depp.


An entry to Viridian Postcard's Sunday Stamps theme of -  Ships

Nice one. I like the Drake portrait stamp and the first day cover as a whole, not sure about the pink on the ship stamp though. Very interesting post!

That's three links with Drake this week so I'm glad you could include the stamp.

As far as I'm concerned, a galleon will outshine any star, including Johnny Depp. :)

Johnny Depp..... Oh sorry.
Lovely stamps, and a lovely cover too. thank you for participating this week.
viridian

Lovely stamps and cover and good to see Drake himself putting in an appearance.

I especially like the old-fashioned look of the Century. It reminds me of decorated porcelain.

I want to experience a Galleon with Johnny Depp on board! lol!
My Sunday Stamps#40: Ships

Eye of the Wind, that's a beautiful name for a ship :) That first stamp is my favorite.