Hellfire Bay in Western Australia is part of the Cape Le Grand National Park and is famous for its quartz sand beaches.  Despite the name of Hellfire this is considered one of the best Aussie beaches although if it does get too hot the waters are said to be very cold. 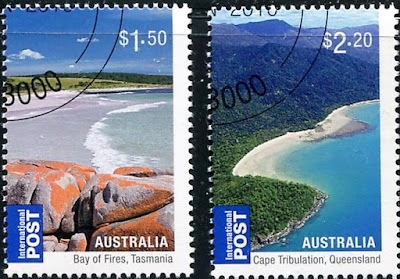 More white sand and blue water in the Bay of Fires, Tasmania. The granite rocks are covered in lichen which gives them this orange hue. Surrounded by the rainforest is Cape Tribulation, so called because this is where Captain Cook's ship scraped the a reef and then ran aground and he wrote  "now began all our troubles".  No troubles nowadays for it is part of the Daintree National Park.  A boardwalk can take one through the mangroves.
Alternatively perhaps take a boat out from a beach in the Indian Ocean from one of the Cocos Islands and you may spot dolphins or whales but travel to the other side of the Indian Ocean for
the Cape Penguin only found on the South West corner of Africa
and it can face in either direction on its rocky perch on these stamps.
But this bird of land and sea is in its element in the water. Here is the Snares Penguin (named after a group of islands lying 200k south of New Zealand) catching its fishy snack.

The beach stamps are stunning, and the penguins are fantastic.

I love the pictures of the beaches. They seem the definition of paradise, now it's hot here :)

I've seen the Australian beaches before but remain fascinated by them. Thank you for including the penguins - fascinating even if I am repeating myself.

Those penguins do look like a reverse image.
The calm waters of those Australian beaches are beckoning... and it's probably cooler at this time of year :)

Yes they did use the same illustrations for the two definitive issues. As far as I can see the animals face left in 1993 and right in 1997. Strangely I've never noticed this before until I picked out the penguins because they were standing on rocks and saw the similarity and then looked at the other animals and saw the same reversal of images.