For this week's Sunday Stamps theme I'm going with the mining aspect mainly because I think I've shown most of my mineral stamps before.  Where better to start than South Africa who over the years have issued a lot on this theme, although I only have some early examples such as this definitive stamp from the 1930s of a Gold Mine. 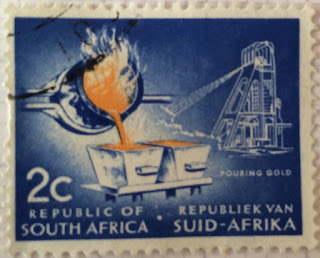 Here comes the next process of heating and pouring the gold. If the tourist heads to Gold Reef City, Johannesburg you can take a ride on a miniature railway, and go underground to see the gold and then watch a gold pour.  Not sure that it will be on the same scale as that shown on the stamp.   South African mines hold 50% of the world's gold reserves but of course the other thing the country is famous for is 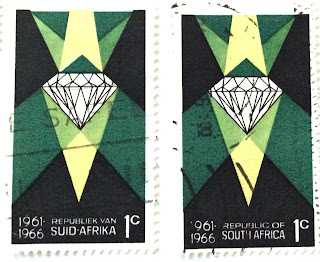 But lets head for the light and journey above ground amongst the granite of the Paarl Mountains in the Western Cape, their name means pearl rock. 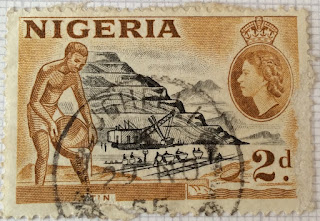 Staying in Africa here are the tin mines of Nigeria.  When this definitive stamp was first issued in 1953 that was the year the country exported 11,942 tons of tin and earned £8.55M but with fluctuating tin prices and the discovery of oil today it is a past industry.  There is still informal mining by the locals who dig holes in the ground to access the tin but it can be a dangerous business with collapsing tunnels.  In the olden days they used to call these type of people prospectors which is where the next Australian stamp comes in 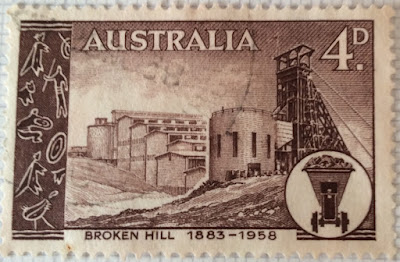 and the Broken Hill Silver Mine first prospected in 1883, the reason for its name no longer exists the hill having been mined away.  The aborigines name for the hills was the more romantic Leaping Crest.  Broken Hill (nickname Silver City) is located in the outback of New South Wales and is Australia's longest lived mining city although mining is no longer the main industry it contains the world's largest silver-lead-zinc deposits.
In China here is some sort of underground machinery grinding its way along a tunnel and lastly

is how it all might start with the geological survey team arriving at a rock face.

An entry to Sunday Stamps II theme of - Rocks, Gems and Minerals - discover more here
Posted by Joy at 11:45

Love the detail in the Broken Hill stamp. And the Paarl Mountains are calling to me....
Thank you for such a wide ranging view and covering all three - rocks, gems and minerals!

A lot of stamps about such a difficult theme!

I like the Chinese geologists at the end. Not much has changed - geologists still carry rock hammers. The Paarlberg rock formation image looks mysterious.

I nearly went down the mining route too, Joy. I would have posted the pouring gold stamp as well.