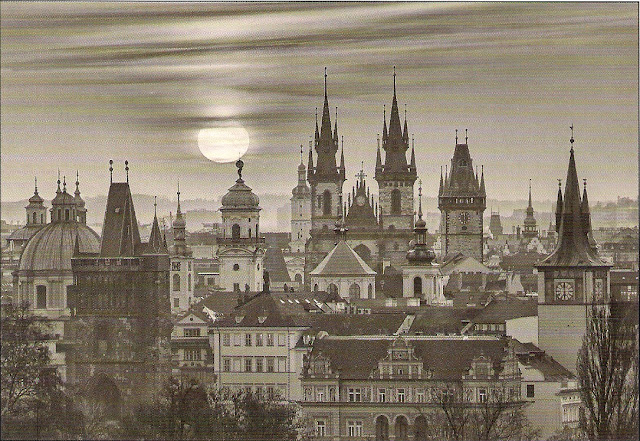 A wonderfully moody photograph of Prague's skyline.  Is the sun going down or coming up? In my imagination it is rising with the quiet of the early morning mist in the distance.  I've just noticed the clock tower on the left reads 6 O'Clock, does that give any clues? The card came with greetings from the "proverbial Heart of Europe" and "The City of a Hundred Towers" although Petr informs me there are in fact 109 of them in his beloved home town of Prague.  I imagine the photographer was on top of one of those 109 taking this photograph for many of them are open to take in the view of the city.

There were also towers on the the stamps he used but from other parts of the Czech Republic in their ongoing stamp series "Beauties of Our Country" and they are both attractive compositions of the essence of a place. 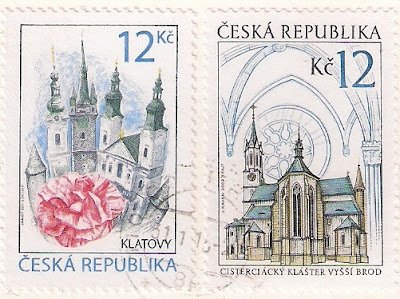 On the left is the 2010 stamp of Klatovy famous for its "baroque pharmacy, catacombs and the Renaissance Town Hall Black Tower". The stamp shows a representation of a corner of the square with the Black Tower on the left which was built in 1547 as a watch tower to help defend the town and also give early warning of fires. Today one can climb the tower for a panoramic view of the town and the nearby mountains. The other building is the snappily titled Church of the Virgin's Immaculate Conception and St Ignatius.  The carnation which completes the trio is the symbol of the city and was first introduced by Baron Volšansky who brought it from the French city of Nancy when he returned home from the Napoleonic Wars. Thus began the love affair with the flower which is celebrated every year with a festival in June/July with hundreds of different types and colours of carnations which must be a perfect match with the baroque architecture.  Stamp Designer: Jan Maget /Engraver: Bohumil Sneider

On the right is the 2009 stamp of the  Cistercian Monastry at Vyssi Brod founded in 1259.  The Cistercians always seemed to build their monasteries in the most delightful places and this one is on the banks of the Vitava River. Stamp Design: Jan Kavan / Engraver: Vaclav Fajt

The other stamp on the card was a pretty little cyclamen.  Stamp Designer: A Khunova /Engraver: Bohumil Sneider
Posted by Joy at 00:22