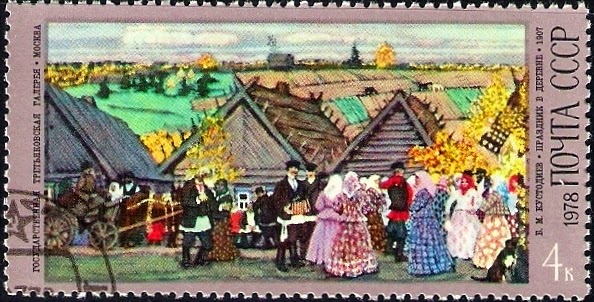 Two artists born in the same year (1878) each got their own set of stamps in 1978 to celebrate their birth centenary. The first stamps to appear featured works by Boris M Kustodiev, the one above is  "Celebration in a Village".  Born in Astrakhan his subjects were of the Volga countryside he remembered from his childhood and youth and his fascination with village festivals.
He said " I do not know if I have been successful in expressing what I wanted in my works - love of life, happiness and cheerfulness, love of all things Russian - this was the only subject of my paintings..."

He visited Paris and Madrid in 1904, one of the works he painted there was (left) "Morning" but yearned to be back in Russia. In childhood after the death of his father his mother had rented a wing in a rich merchant's house so perhaps the opulent portrait on the right of the "Merchant's Wife Drinking Tea" (1912) is another memory.

He was depressed by the revolutionary events of 1905 and his contribution was drawing caricatures of the tsarist officials in satirical journals.  He started to paint the worker's struggle as well as producing book illustrations for Russian classical literature.  Developing tuberculosis of the spine he travelled to a Swiss clinic for treatment.  On his return to Russia he further expanded his oeuvre by painting calendars, book covers and stage scenery. 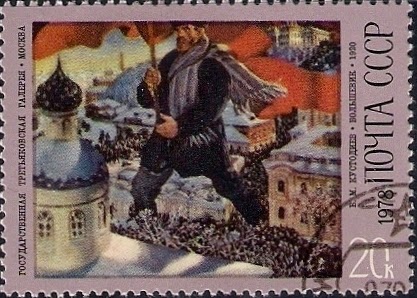 Post revolutionary Russia  gained him many commissions and he painted the work above from 1919-20 "The Bolshevik" as national hero portraying him as full of energy, strength and will.  Kustodiev continued to paint political subjects until his death in 26 May 1927.

Here is the set's miniature sheet with his self portrait of 1904-6 which brings us nicely to the other self portrait on the miniature sheet on the right of Kuzma Petrov-Vodkin, whose life has many similarities with Kustodiev.  Also born on the Volga in 1878 but in the village of Khvalynsk he was the son of shoemakers and took painting lessons from a local sign maker and icon painter. His ambition was to get into rail-road college but alas for him, but not posterity, he failed the entrance exam and turned back to painting.  His most famous painting is possibly the arresting 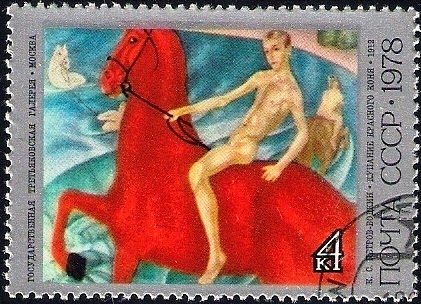 "Bathing of the Red Horse"

A true Renaissance man who played the violin, wrote and tried to combine art and science his ambition was to synthesise the art of east and west; he also for good measure ran into trouble with the Russian Orthodox Church who destroyed some of his paintings. The painting on the left is "Petrograd 1918" and on the right "Commissar's Death".  The latter shows nicely his technique of spherical perspective which distorts the perspective, the viewer feels both high up at a distance yet close to the action while the globe curves in the distance.

Petrov-Vodkin developed pulmonary tuberculosis in 1927 and had to give up painting (the oils affected his lungs) so he turned to writing and produced self illustrated and semi-autobiographical books which are highly regarded.  He died in Leningrad in 1939.
His art was then largely forgotten but happily rediscovered in the late 1960s (when his books were also republished) and brought to the philatelists attention here in 1978.

Im blown away by this excellent post and the stamps it shows. I now would like to see the real paintings.

my jaw dropped at these...I am amazed how USSR even back then had such fantastic stamps issued, paying attention to so much detail, done with so much love and care! plus one gets to learn a lot about art through these! thanks for sharing them!!

Wow, such beautiful stamps, and thanks for adding the history too. I really like the Kustodiev art.

I'm not normally a fan of art on stamps, but these are wonderfully done. So crisp!
I also really appreciate the background information your researched and provided.

Thank you for your well researched post and interesting stamps. The part about spherical perspective was interesting.

The Russians really produced a lot of nice art stamps.

the red horse is striking