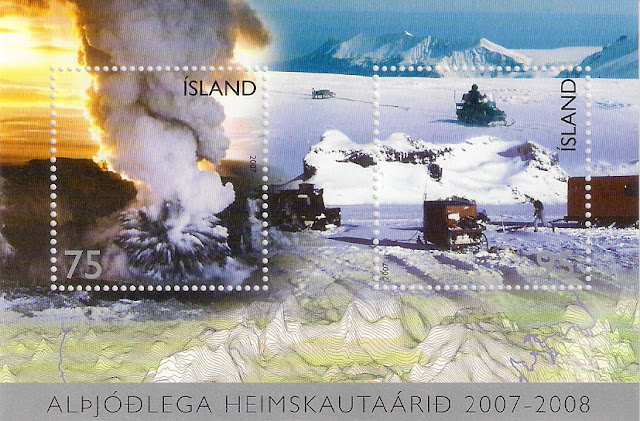 The middle of summer seems a perfect time to show the largest icecap in Europe, the Vatnajökull glacier.  The miniature sheet shows a volcanic eruption and thanks to Iomoon's volcanoes on stamps website I can perhaps identify it as Grimsvotn in south east Iceland.  Lying beneath the ice the eruptions lead to melting of the ice and the formation of Jokulhlaups (an Icelandic word that has entered the English language meaning a glacial outburst flood).  There are several volcanoes under the Vatnajökull icecap of which Grimsvotn is the most active but not the largest and it is also home to Iceland's highest peak which has appeared on Iceland's stamps through many eras.

The other stamp of the miniature sheet shows radio-echo sounding equipment being used to map the landscape beneath the ice cap.  Nowhere in Iceland does more precipitation fall (usually as snow), or more water drain to the sea than the south side of Vatnajköull   The miniature sheet was issued in 2007 as part of the International Polar Year and was designed by Hlynur Ólafsson who has designed several of Iceland's stamps.

This is a brilliant sheet. Iceland's volcanoes have a fascinating history for me.

This is so interesting. My first time to read about 'glacial outburst flood'. I almost want to witness such event happening in person. Very nice sheet!

A great sheet, the background design definitely adds to the beauty of the stamp.

Geology stamps! I love them! A glacial outburst flood is a big powerful scary thing. I've only seen them on TV, but still....
Thank you for participating.

The volcanic eruption is very striking and dramatic.

Very spectacular! Are you sure Jokulhlaups has entered the English language? It doesn't exactly trip off the tongue. :)